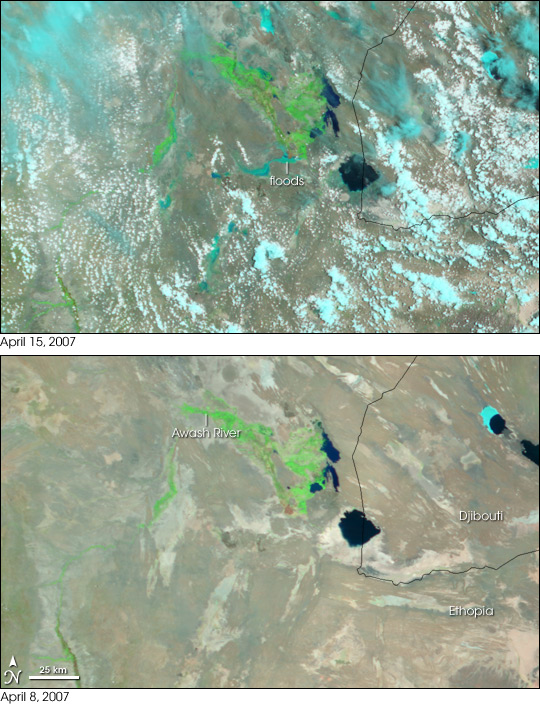 For the second time in less than a year, eastern Ethiopia faced flooding in the wake of heavy rains in mid-April 2007. The previous floods came at the end of the rainy season in August and September 2006 and caused extensive damage throughout the country. In April, rains once again triggered flooding around the Gemeri and Abhe Bid Lakes near Djibouti. The Moderate Resolution Imaging Spectroradiometer (MODIS) on NASA’s Terra satellite captured the top image of the floods on April 15, 2007. The lower image was taken one week earlier, immediately before the rains began.

In the top image, the floods fill desert wadis and normally dry salt pan basins. Mingled with the fine sediment of desert salt pans, the flood water is light blue instead of the customary black in this image made from visible and infrared light. Clouds, also light blue, obscure some of the flooding in the top image. The desert landscape is tan-pink and plant-covered land around the Awash River is bright green. In the large image, it is clear that the rainfall spurred plant growth across the desert, infusing the image with green. The floods extended south of the area shown here into the city of Dire Dawa, where water damaged several homes, said the United Nations Office for the Coordination of Humanitarian Affairs.

You can download a 250-meter-resolution KMZ file of the Ethiopian floods for use with Google Earth.