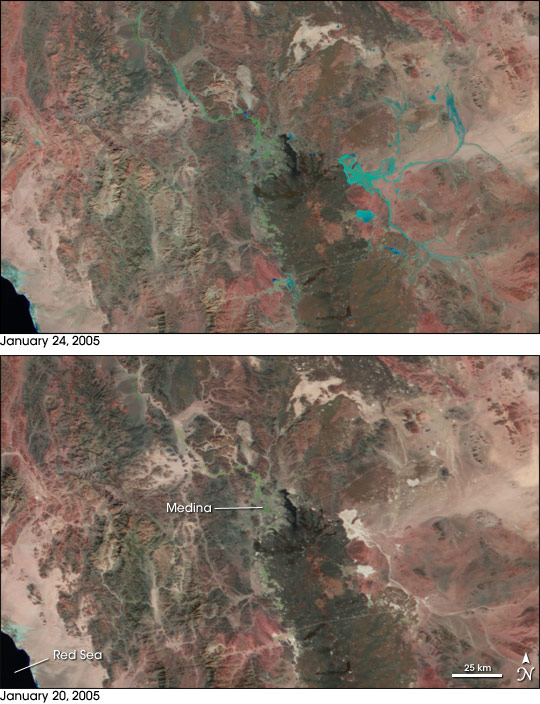 Floods water gushes through the deep valleys around Medina, Saudi Arabia, looking like blue veins in the marbled desert landscape. The floods resulted from a powerful storm, which brought heavy rains to the desert kingdom during the final days of the annual Hajj pilgrimage, when millions were visiting the region. According to news reports, 29 people have died attempting to travel in the flooded valleys around Medina.

The Moderate Resolution Imaging Spectroradiometer (MODIS) flying on NASA’s Terra satellite captured the top image of the floods on January 24, 2005, two days after the storm. In this false-color image, the sediment-laden water is bright blue-green, and bare desert ground is pink. On January 20, the ground that is water-covered on January 24, was white, probably filled with loose, salt-pan soil that is characteristic of seasonal desert lakes and rivers. In both images, streaks of green plants line the Wadi al Hamd, which flows by the city from the northwest. The black Harrat Rahat (Rahat lava fields) stretch south from Medina to Mecca, just beyond the southern boundary of the images.