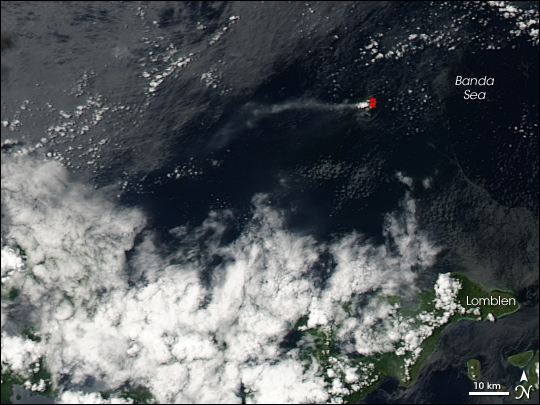 On April 4, 2007, the volcanic island of Batu Tara in Indonesia’s Lesser Sunda Islands released a volcanic plume. The Moderate Resolution Imaging Spectroradiometer (MODIS) on NASA’s Aqua satellite took this picture the same day. This image shows the faint plume blowing westward away from the island, which sports a hotspot, outlined in red. Hotspots are areas where MODIS detects surface temperatures much hotter than the surroundings.

Batu Tara lies roughly 50 kilometers (30 miles) north of Lomblen Island in the Flores Sea. It is a stratovolcano composed of alternating layers of solidified ash, hardened lava, and volcanic rock.

You can download a 250-meter-resolution Mount Batu Tara KMZ file for use with Google Earth.