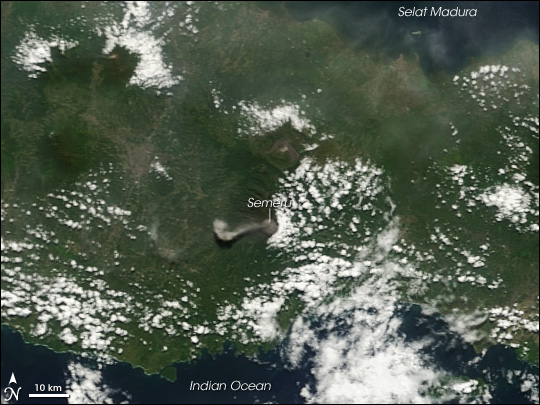 On the Island of Java, Indonesia, Mount Semeru released a volcanic plume on May 3, 2007. The Moderate Resolution Imaging Spectroradiometer (MODIS) on NASA’s Terra took this picture the same day. This image shows the opaque, gray-beige plume blowing toward the west over the island of Java. Scattered around the volcano are bright white clouds.

Semeru is a stratovolcano composed of alternating layers of solidified lava, hardened ash, and volcanic rocks. In part of a larger pattern of seismic activity on Java, the volcano erupted in 2006.

You can download a 250-meter-resolution Semeru KMZ file for use with Google Earth.