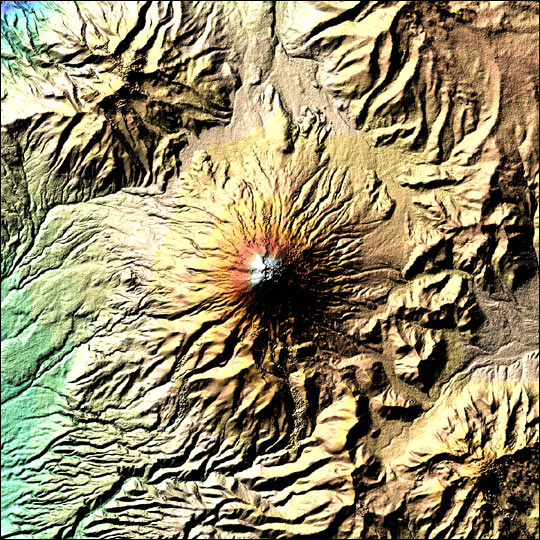 On February 19, 2000, Space Shuttle Endeavour passed over the highly active and dangerous volcanic zone of the Andes in Equador. Endeavour was mapping elevations on most of the Earth’s land surface during the Shuttle Radar Topography Mission (SRTM). There have been more than 50 eruptions of Mt. Cotopaxi alone since 1738. With its height of 5,897 meters it is more than 3,000 meters higher than the surroundings. The base of this stratovolcano has a width about 23 km.

The digital elevation model acquired by SRTM, with its resolution of 25 m x 25 m, is so rich in detail that you can even make out an inner crater with a diameter of 120 m by 250 m inside the outer crater (800 m x 650 m). Blue and green correspond to the lowest elevations in the image, while beige, orange, red, and white represent increasing elevations. Numerous valleys formed by powerful Lahars (mudflows) are prominent in the digital elevation model. Lahars can cause severe damage even 300 km away from the volcano. This poses a high risk to the local population, their settlements and fields. Interferometry is especially useful in monitoring such dangerous volcanoes. Highly accurate observations of changes in volcanoes from space can provide vital parameters for early warning systems, without risk to the lives of scientists. An operational system, though, would rely on a system of interferometric sensors to map on a regular basis.

For more information about this image, and a wider-scale view, visit X-SAR/SRTM Elevation Model Shows Highest Active Volcano in the World.