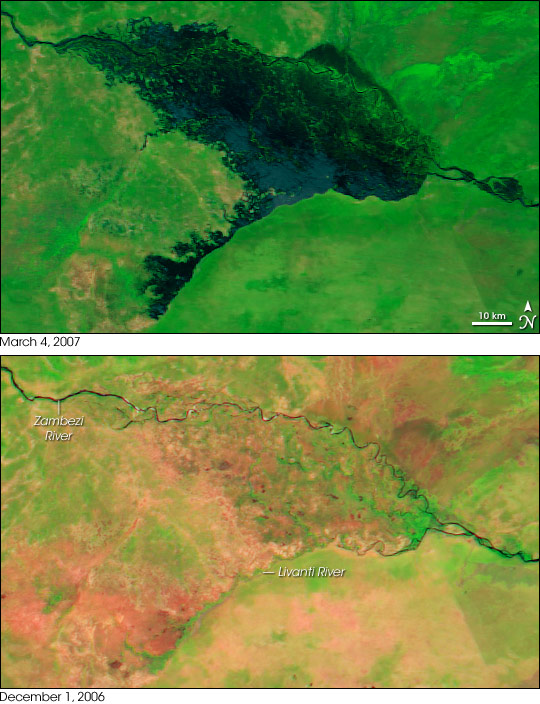 On March 2, 2007, water levels on the Zambezi River near Katima Mulilo, in Namibia’s Caprivi Strip, reached a record high, said the Dartmouth Flood Observatory. Though the Caprivi Strip, shown in this image, floods regularly during the rainy season, the floods usually peak in late March or April. In 2007, an unusually early and intense rainy season drove flood waters higher than ever by early March.

In the top image, the flood waters spread over the triangular Caprivi Strip where the Zambezi and the Livanti (Chobe) Rivers meet. The Moderate Resolution Imaging Spectroradiometer (MODIS) on NASA’s Terra satellite captured the image on March 4, two days after the river rose to a record high. The lower image, taken by the MODIS sensor on NASA’s Aqua satellite on December 1, 2006, shows the region before the rains started in mid-December. Not only are the rivers significantly smaller, but the region has notably fewer plants. In these images, made with infrared and visible light, plant-covered land is bright green, while sparsely vegetated or bare ground is tan and pink. Water is dark blue or black.

According to local news reports, six people have died in the floods shown here, while thousands have been displaced and crops and settlements inundated.

In the wake of an early and intense rainy season, the upper Zambezi River was overflowing in March 2007.