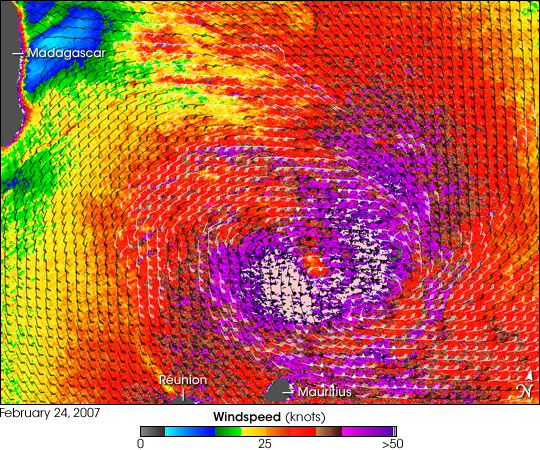 Tropical Cyclone Gamede was off the shore of Madagascar not far from the Mascarene Islands of Réunion and Mauritius on February 23, 2007, when it was observed by NASA’s s QuikSCAT satellite at 11:21 p.m. local time (2:21 UTC, February 24). The storm was not passing over any land nor anticipated to do so, according to the Joint Typhoon Warning Center, but it brought storm surge to coastal communities in Madagascar and the Mascarene Islands, and very heavy rain fell in several areas.

This data visualization of QuikSCAT’s observations shows Cyclone Gamede and its spiral pattern of winds. The image shows wind speed in color and wind direction with small barbs. White barbs point to areas of heavy rain. Gamede was well-formed, with winds spiraling around a distinct, calmer eye. This pattern is typical of tropical cyclones. Since the storm was in the Southern Hemisphere, the Coriolos force, which gives all cyclones their spin, turned Gamede clockwise, the opposite direction to hurricanes and typhoons that form in the Northern Hemisphere. According to the University of Hawaii’s Tropical Storm Information Center, Cyclone Gamede had sustained winds around 90 knots (165 kilometers per hour, 103 miles per hour) at the time of the QuikSCAT observations.

Measurements of the actual wind strength of cyclones measured near the surface or from aircraft often document sustained winds higher than those estimated by QuikSCAT. QuikSCAT uses a scatterometer, which sends pulses of microwave energy through the atmosphere to the ocean surface and measures the strength of signal that bounces back from the wind-roughened surface. The energy of the microwave pulses changes depending on wind speed and direction, giving scientists a way to monitor wind around the world. This technique does not work over land, but allows measurements in storms over oceans.

Tropical cyclones, however, are difficult to measure. To relate the strength of the signal that bounces back to the radar to actual wind speed, scientists compare measurements taken from buoys or other ground stations to data the satellite acquired at the same time and place. Because the high wind speeds generated by cyclones are rare, scientists do not have enough information to know how to translate data from the satellite for wind speeds above 50 knots (about 93 km/hr or 58 mph). Also, the unusually heavy rain found in a cyclone distorts the microwave pulses in a number of ways, making a conversion to exact wind speed difficult. Instead, the scatterometer provides a general picture of the relative wind speeds within the storm and shows wind direction.