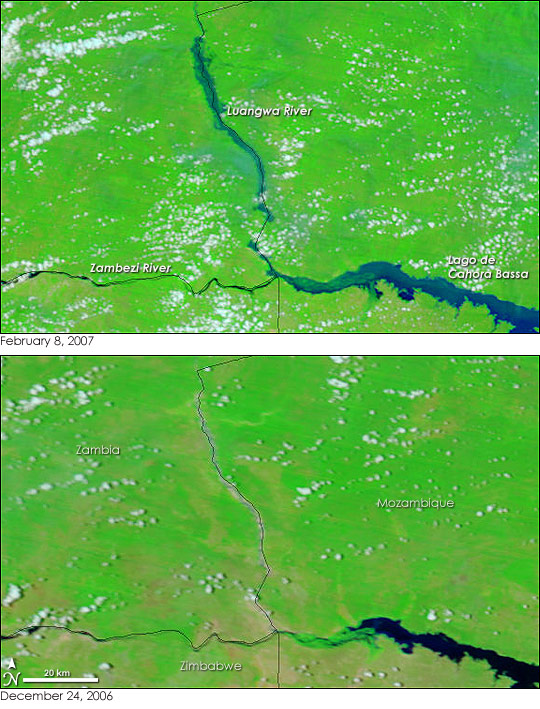 On February 8, 2007, the government of Mozambique ordered the evacuation of 2,500 people as water levels on the Zambezi River continued to rise, reported the BBC. Floods have threatened many countries in southern Africa since early 2007, when the rainy season got an unusually early and intense start. As rivers in Zambia, Malawi, and Zimbabwe filled, they drained into the Zambezi River, which spilled over its banks in many locations. By early February, the situation continued to deteriorate, driven in part by the vast amount of water being released from the Cahora Bassa Dam in western Mozambique. On February 6, as much as 5,170 cubic meters of water was being discharged from the dam every second, as more than 8,000 cubic meters of water flowed into the reservoir, said the United Nations Office for the Coordination of Humanitarian Affairs (OCHA).

The dam was approaching its capacity on February 8, said OCHA, when the Moderate Resolution Imaging Spectroradiometer (MODIS) on NASA’s Terra satellite captured the top image. The image shows the western shore of the Cahora Bassa Reservoir where the Zambezi and its tributary, the Luangwa River, form the back edge of the lake. The dam itself is beyond the right edge of the above image, but is shown in the large image. The lower image shows the region on December 24, 2006, before the rains started. By February 8, the reservoir had expanded to the confluence of the two rivers. The Luangwa River had also widened well beyond its dry-season banks. The water in the Cohora Bassa Reservoir lightened from blue-black to a dusty blue with the influx of muddy flood water.

Both of these images were created with a combination of infrared and visible light that makes water appear dark blue or black. Plant-covered land is bright green, and bare or sparsely vegetated land is tan-pink. Clouds are white and pale blue. The MODIS Rapid Response System produces similar false-color images as well as photo-like, true-color images of southern Africa daily.