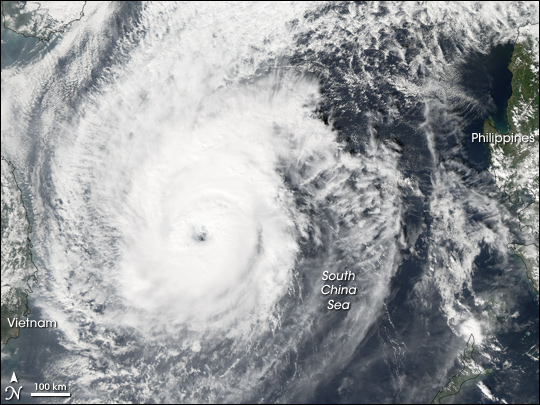 Super Typhoon Durian crossed the Philippines on November 30, 2006. According to BBC News Service, the typhoon was quite powerful, with sustained winds as high as 230 kilometers per hour (140 miles per hour). The storm’s name comes from a pungent fruit native to Southeast Asia. In the Philippines, however, the typhoon was called Reming. The twelfth typhoon of the season, Durian followed a track through the Philippines very similar to typhoons Xangsane, Cimaron, and Chebi earlier in the year. Durian caused substantial damage and triggered landslides and flooding. According to the Red Cross, as of December 3, 2006, some 406 people in the Philippines had died from various causes directly linked to the typhoon, with some 398 people missing.

This photo-like image was acquired by the Moderate Resolution Imaging Spectroradiometer (MODIS) on the Aqua satellite on December 3, 2006, at 1:30 p.m. local time (5:30 UTC). By this time, Typhoon Durian had passed through the island chain of the Philippines and crossed most of the South China Sea. The storm system was a well-defined, spiraling ball of clouds with an open eye at its center. Sustained winds were around 165 km/hr (105 mph), according to the University of Hawaii’s Tropical Storm Information Center.

Residents of southern Vietnam were bracing for the coming storm, which was expected to bring significant wind damage and flooding from heavy rains even though the typhoon had lost considerable power from its traverse through the Philippines.