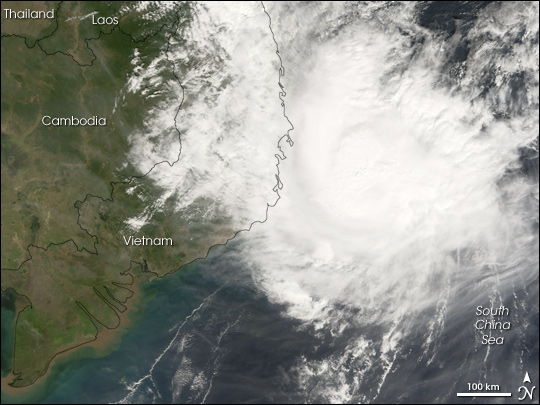 Super Typhoon Durian crossed the Philippines on November 30, 2006. The storm’s name comes from a pungent fruit native to Southeast Asia, but in the Philippines, the typhoon was called Reming. The twelfth typhoon of the season, Durian followed a track through the Philippines very similar to typhoons Xangsane, Cimaron, and Chebi earlier in the year. Durian caused substantial damage and triggered landslides and flooding. According to the Red Cross, as of December 3, 2006, some 406 people in the Philippines had died from various causes directly linked to the typhoon, with some 398 people missing. The typhoon lost considerable power as it crossed the island chain and regained only a little strength as it crossed the South China Sea before coming ashore on mainland Asia in southern Vietnam.

This photo-like image was acquired by the Moderate Resolution Imaging Spectroradiometer (MODIS) on the Terra satellite on December 4, 2006, at 10:10 a.m. local time (3:10 UTC), about three hours before the storm’s center crossed the shoreline. The storm system had lost much of its shape and definition by the time. Although the storm lacked a clear eye, powerful thunderstorm clouds (“boiling” clouds) are visible in the heart of the storm. Sustained winds were around 133 kilometers/hour (82 mph), according to the Associated Press. Residents of southern Vietnam were bracing for the coming storm, which was expected to bring significant wind damage and flooding from heavy rain. Authorities evacuated about 14,000 people from the coastal section of Vietnam where the storm had been expected to hit. Ships at sea were ordered into coastal waters for safety.