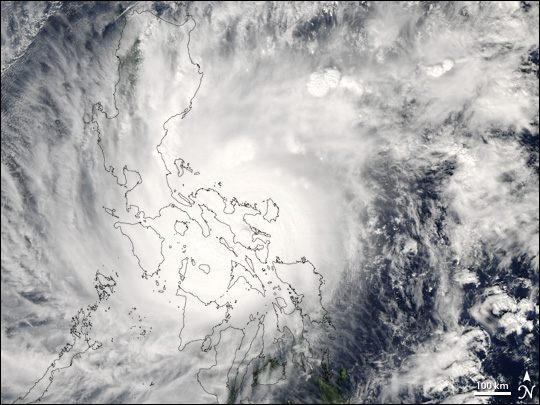 Super Typhoon Durian came ashore in the Philippines on November 30, 2006. According to BBC News Service, the typhoon was quite powerful, with sustained winds as high as 230 kilometers per hour (140 miles per hour). The storm’s name comes from a pungent fruit native to Southeast Asia. The twelfth typhoon of the season, Durian was projected as of November 30 to follow a track through the Philippines very similar to typhoons Xangsane, Cimaron, and Chebi, which all crossed the northern part of the island chain, bringing heavy rain and causing substantial damage. As with those other storms, Durian was expected to continue its eastward track and to cross the South China Sea, striking mainland Asia in Vietnam.

This photo-like image was acquired by the Moderate Resolution Imaging Spectroradiometer (MODIS) on the Aqua satellite on November 30, 2006, at 1:00 p.m. local time (5:00 UTC). At this time, Typhoon Durian was well over the island chain, with the cloud-filled eye over the land and the spiral arms of clouds covering almost the entire northern Philippines. Sustained winds were around 230 kilometers/hour (140 mph), according to the University of Hawaii’s Tropical Storm Information Center. These speeds were the peak strength projected for the storm, which was predicted to lose power as it traveled over the islands. Forecasts for its fate as it crossed the South China Sea were uncertain, but since the typhoon season was waning, sea surface temperatures in the South China Sea were not optimal for storm intensification, and forecasters were expecting the typhoon to gradually lose power well before coming ashore in southern Vietnam.

You can also download a 250-meter-resolution Typhoon Durian KMZ file for use with Google Earth.