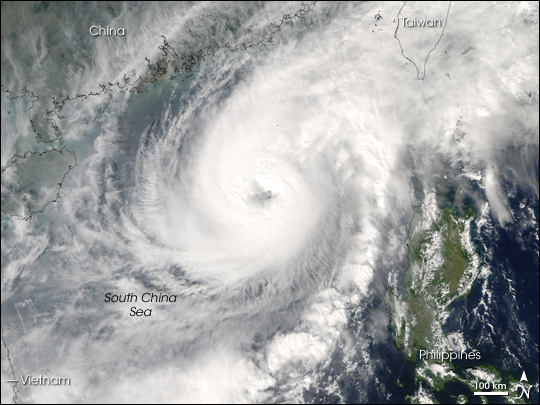 Super Typhoon Cimaron struck the northernmost large island in the Philippines, Luzon, on October 29, 2006. According to BBC News Service, the typhoon was the most powerful to strike the island chain since 1998, lashing Luzon with 200-kilometer-an-hour (125-mile-per-hour) winds and torrential rain. After passing through the island chain, Cimaron weakened significantly, falling below Category 3 strength (the threshold seperating a typhoon from a super typhoon). The typhoon then picked up power over the South China Sea as it headed towards Vietnam. On November 1, Reuters reported a projected landfall in Vietnam on November 3, with an expected strength of Category 1, though predictions of storm strength are challenging to make accurately. Residents of Vietnam were preparing for possible evacuations, as were residents of the Chinese coastal areas, including the island of Hainan and Hong Kong.

This photo-like image was acquired by the Moderate Resolution Imaging Spectroradiometer (MODIS) on the Aqua satellite on October 31, 2006, at 1:35 p.m. local time (5:35 UTC). At this time, Typhoon Cimaron was in the center of the South China Sea. Winds were around 160 kilometers per hour (100 miles per hour), according to the University of Hawaii’s Tropical Storm Information Center.

You can also download a 250-meter-resolution Typhoon Cimaron KMZ file for use with Google Earth.