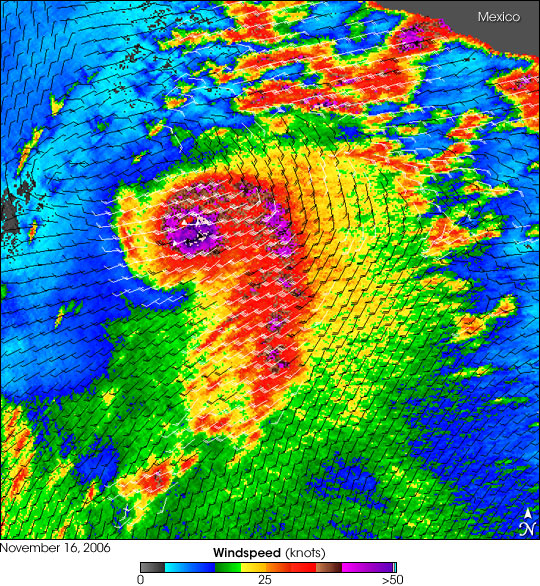 For the first time since 1961, two tropical storms formed in the month of November in the Eastern Pacific. The first was Tropical Storm Rosa. On November 13, 2006, Tropical Storm Sergio became the second tropical storm of the month. Sergio, unlike Rosa, continued to build in power to reach hurricane status, making it the tenth hurricane of the 2006 Eastern Pacific storm season. While the hurricane season officially runs until the end of November, late storms are unusual. Only five other storms on record have formed later in the season than Sergio. It is also unusual for tropical storms that form this late in the season to intensify all the way to hurricane strength as Sergio did.

This data visualization shows Sergio while it was a Category 2 hurricane, early in the morning of November 16. The image depicts wind speed in color and wind direction with small barbs. White barbs point to areas of heavy rain. The data were obtained by NASA’s QuikSCAT satellite on November 16, 2006, at 12:29 UTC (5:29 a.m. local time). Sergio appears to have a well-defined and circular core, with a long apostrophe-shaped tail streaming out from the center. However, the wind-direction barbs do not spiral tightly around the center of the storm as they would in a strong hurricane. This asymmetry hints that wind shear may be pulling the storm apart.

QuikSCAT employs a scatterometer, which sends pulses of microwave energy through the atmosphere to the ocean surface, and measures the energy that bounces back from the wind-roughened surface. The energy of the microwave pulses changes depending on wind speed and direction, giving scientists a way to monitor wind around the world. This technique does not work over land, and hence the lack of measurements over the mainland of Mexico shown here.