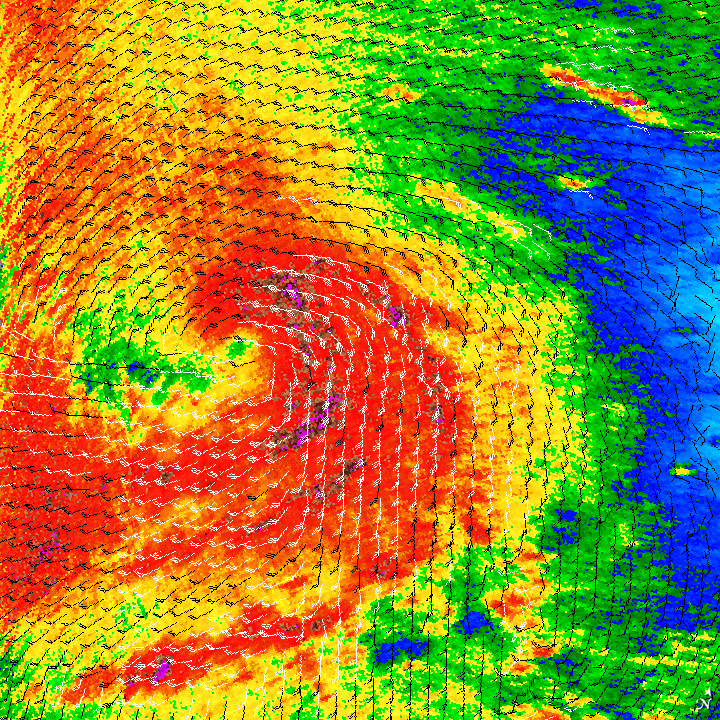 This image of wind speed and direction in Hurricane Bill is based on data from NASA’s QuikSCAT satellite on August 16. The strongest winds are pink, purple, and red, while areas of calmer winds are blue and green. Barbs indicate wind direction and strength; the more flags on the barb, the stronger the wind. White barbs indicate regions where the wind was accompanied by heavy rain.

QuikSCAT measures wind speeds over the ocean by sending pulses of microwave energy through the atmosphere to the ocean and measuring the energy that bounces back from the wind-roughened surface. The intensity of the microwave echo changes depending on wind speed and direction. Intense rain rippling on the ocean’s surface and the relative rarity of the extreme winds seen in a tropical cyclone make it difficult to accurately measure wind speeds above 50 knots using the satellite. Instead, QuikSCAT images provide a picture of the wind structure within the storm, which, among other things, can reveal whether a storm has developed a strong eye.