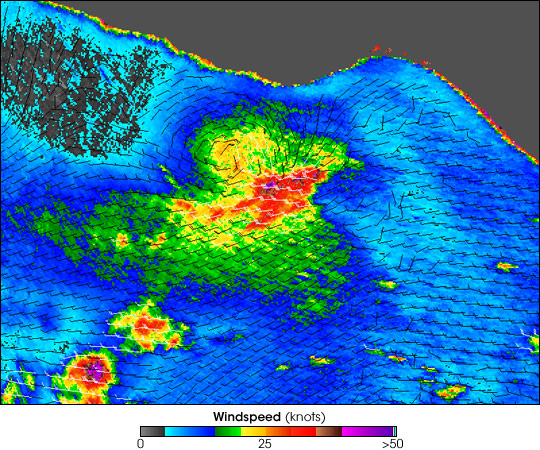 Tropical Storm Barbara, the second named storm of the 2007 Pacific hurricane season, was swirling off the coast of Mexico on May 29, 2007, when it was observed by NASA’s QuikSCAT satellite at 5:25 p.m. local time (00:25 UTC on May 30, 2007). According to Mexico’s National Meteorological Service (Spanish language site), Barbara had sustained winds that peaked around 100 kilometers/hour (55 mph) on May 29, but had eased off since then. The U.S. National Hurricane Center predicted (as of May 31) that the storm most likely would not become a hurricane, but could bring heavy rain to the Mexican and Guatemalan Pacific coastal regions.

This data visualization of QuikSCAT’s observations shows Tropical Storm Barbara and its spiral pattern of winds. The image depicts wind speed in color and wind direction with small barbs. White barbs point to areas of heavy rain. The storm does not have a clear, rain-free center or a tight spiral shape as would be expected of a larger and more powerful storm.

QuikSCAT employs a scatterometer, which sends pulses of microwave energy through the atmosphere to the ocean surface, and measures the energy that bounces back from the wind-roughened surface. The energy of the microwave pulses changes depending on wind speed and direction, giving scientists a way to monitor wind around the world. This technique does not work over land, but allows measurements in storms over oceans.

The Pacific hurricane season begins on May 15 each year, and in 2007, the season had already registered two named storms by the end of the month, Alvin and Barbara. The U.S. National Hurricane Center has only twice before recorded more than one named storm in the Pacific in May (in 1984 and 1956). Hurricane forecasters have been predicting a busy season for hurricanes in both the Pacific and Atlantic basins in 2007, and the early surge of storms is consistent with this forecast.

Tropical Storm Barbara was the second named storm of the 2007 Pacific hurricane season.