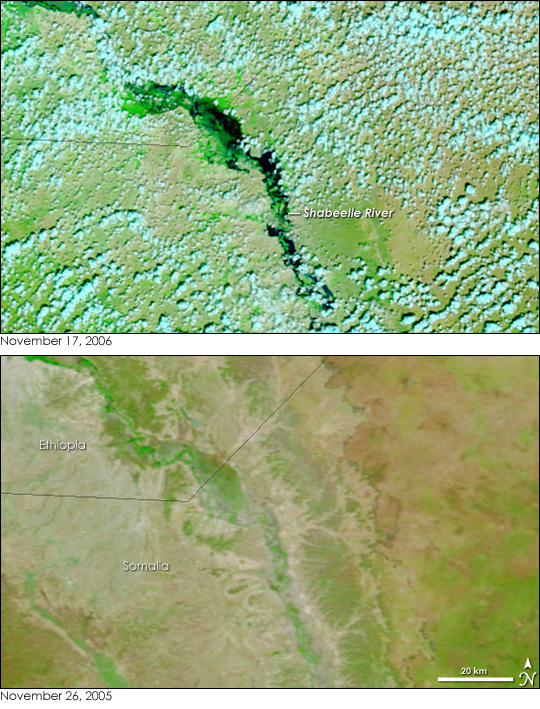 As East Africa’s short rainy season progressed into November, the downpour continued to stress rivers throughout Somalia, Ethiopia, and Kenya. The widespread flooding began with the rains in mid-October, and continued through the end of November when unusually heavy rain fell on drought-hardened earth, said the Famine Early Warning System Network (FEWS NET). Between October 1 and November 10, 2006, most regions in southern Somalia received more than 300 percent of their normal rainfall, FEWS Net added. The rain had a dual effect on the land. In the long term, the rains will help the region recover from drought, but in some river basins, the rains triggered floods that destroyed crops.

Among the river basins most severely affected by flooding is the Shabeelle River (Shabele River in Ethiopia). The top image, taken by the Moderate Resolution Imaging Spectroradiometer (MODIS) on NASA’s Terra satellite on November 17, 2006, shows just how much the Shabeelle River had swollen compared to 2005, when the region was in drought. Flooding along this section of the Shabeelle drove 50,000 from their homes in the town of Beletweyne, which was uninhabitable by November 17, said the United Nations. The floods are visible through scattered clouds, which are pale blue in this image. Water is black, plant-covered land is bright green, and sparsely vegetated land is tan-pink.

Floods in Malawi and Mozambique