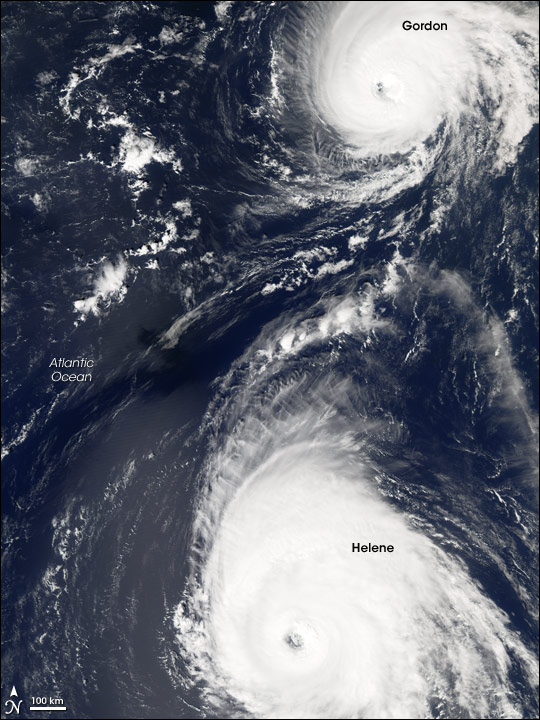 The 2006 Atlantic Hurricane season had a slow start, with very few named storms in the first months of the season. But in early September, the previously hurricane-less season threw out four hurricanes in a row. The first two hurricanes were both short-lived relative weak Category One hurricanes, Ernesto and Florence. But the season shifted into high gear as Florence was spinning down in the North Atlantic in mid-September. Hurricanes Gordon and Helene formed in quick succession, both reaching Category Three strength a few days from each other. However, only Ernesto amongst these four hurricanes made landfall; a persistent ridgeline of high pressure over the U.S. east coast steered storms away into the North Atlantic. Florence, Gordon, and Helene have each been steered north well away from the coastland mainland, though Florence did bring strong winds, heavy rain, and storm surge to Bermuda. As of September 19, it appeared that Gordon would continue to pull away to the north and east without passing near Bermuda, and early concerns that Helene might strike the island have been revised, and this powerful hurricane is also expected to arc away to the north well away from the island.

This photo-like image was acquired by the Moderate Resolution Imaging Spectroradiometer (MODIS) on NASA’s Aqua satellite on September 18, 2006, at 12:45 p.m. local time (16:45 UTC). Both Gordon and Helene are well-defined hurricane spirals in this image, with tightly wound central portions, complete eyewall around the storm center, and both possessing well-defined cloud-filled eyes. Hurricane Helene, however, was much larger and continuing to gather power, while the older storm Gordon was further north over cooler water and losing power. At the time of this image, according to the University of Hawaii’s Tropical Storm Information Center, Gordon had peak sustained winds of 160 kilometers per hour (100 miles per hour), making it a Category Two storm, down from its earlier Category Three status. Helene at the same had sustained winds of 185 km/hr (115 mph), making it a powerful Category Three storm. While neither hurricane was expected to cross any land in the coming days, Gordon was predicted to wane in power as it heads north and east over cooling water, while Helene will most likely continue to track westerly and arc up north, staying over warmer seas and building power slightly or at least sustaining its Category Three status.