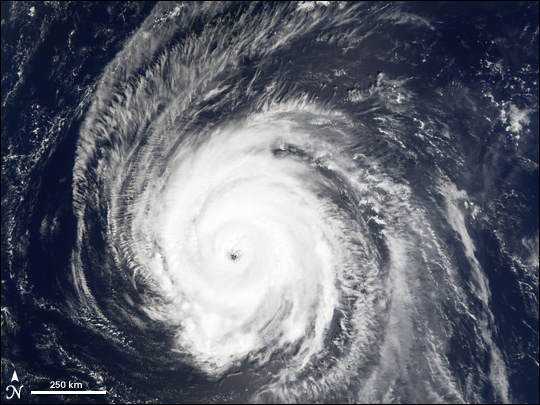 The 2006 Atlantic hurricane season had a slow start, with very few named storms in the first months of the season. But in early September, the previously hurricane-less season threw out four hurricanes in a row: Ernesto, Florence, Gordon, and Helene. A persistent are of high pressure over the U.S. East Coast steered the last three of these four storms away into the North Atlantic. Hurricanes Gordon and Helene both reached Category 3 status. As of September 19, Helene was not expected to make landfall on any of the Atlantic islands, though it could pass close enough to Bermuda to bring strong storm surges.

This photo-like image was acquired by the Moderate Resolution Imaging Spectroradiometer (MODIS) on NASA’s Terra satellite on September 19, 2006, at 10:15 a.m. local time (14:15 UTC). Helene is a well-defined, sprawling storm system with long spiral arms, a tightly wound central portion, and a distinct eyewall of clouds encircling a cloud-filled eye. These are all telltale signs of a powerful hurricane. According to the University of Hawaii’s Tropical Storm Information Center, Helene had sustained winds reaching as high as 185 kilometers per hour (115 miles per hour), making it a powerful Category 3 storm. As of September 19, Helene was predicted to build power slightly since it was traveling over warm seas with no significant land to disrupt it.