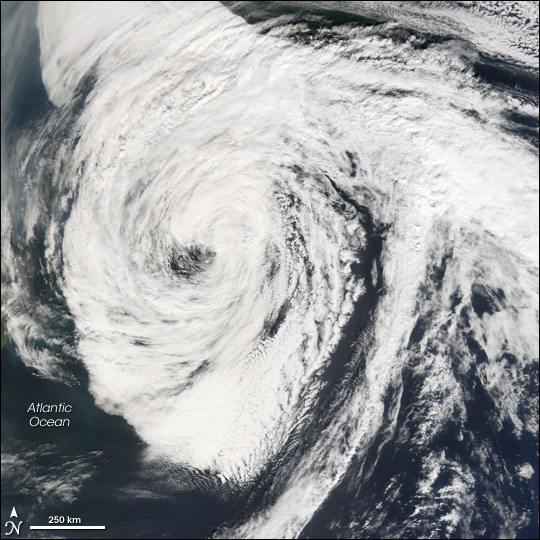 Hurricane Florence was the sixth named storm of the 2006 Atlantic Hurricane Season. Florence started as a tropical depression (area of low air pressure) north and east of the South American coast on September 3, growing in power and size gradually. By September 11, 2006, it had become a Category 1 hurricane.

This photo-like image was acquired by the Moderate Resolution Imaging Spectroradiometer (MODIS) on the Terra satellite on September 14, 2006, at 9:50 a.m. local time (13:50 UTC). Florence at the time of this image was a large, open swirl spread over a wide area of the northern Atlantic Ocean. Florence had sustained winds of around 100 kilometers per hour (65 miles per hour) at the time this satellite image was acquired, according to the University of Hawaii’s Tropical Storm Information Center.

Florence brought powerful winds, rain, and surf to Bermuda as the storm passed as close as 100 kilometers (60 miles) to the island, according to Reuters. By September 15, Florence had traveled far enough north for the storm to be classified as extra tropical (outside the tropics). It brought strong storm surge to the Canadian coast.

The sixth storm of the 2006 Atlantic hurricane season, Hurricane Florence formed on September 3, 2006. Florence weakened as it moved north, becoming an extra-tropical storm by September 15.