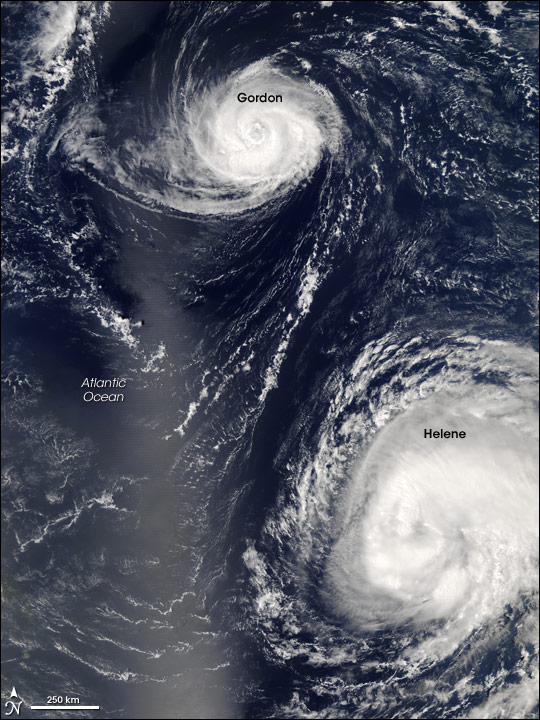 The 2006 Atlantic hurricane season had a slow start, with few named storms—and no hurricanes—in the first months of the season. But in September, the season threw out four hurricanes in a row. The first two hurricanes were both short-lived and relatively weak Category 1 hurricanes, Ernesto and Florence. But in mid-September, Hurricanes Gordon and Helene formed in quick succession, both reaching Category 3 strength a few days from each other. Of the four hurricanes, only Ernesto made landfall; a persistent ridgeline of high air pressure over the U.S. East Coast in September steered storms away from the United States into the North Atlantic.

This photo-like image was acquired by the Moderate Resolution Imaging Spectroradiometer (MODIS) on NASA’s Terra satellite on September 16, 2006, at 12:55 p.m. local time (16:55 UTC). Gordon is a very large and well-defined hurricane in this image, possessing a distinct and tightly wound central portion, a strong and complete eyewall (cloud ring) around the eye of the storm, and a well-defined eye. South and east of the more mature Hurricane Gordon lies the larger, more sprawling, and younger Hurricane Helene. Both were Category 3 strength at the time, but Helene had only reached Category 3 status a few hours before, while Gordon had been at Category 3 stage for two days. This duet provides a glimpse of how storms’ appearances change as they mature.