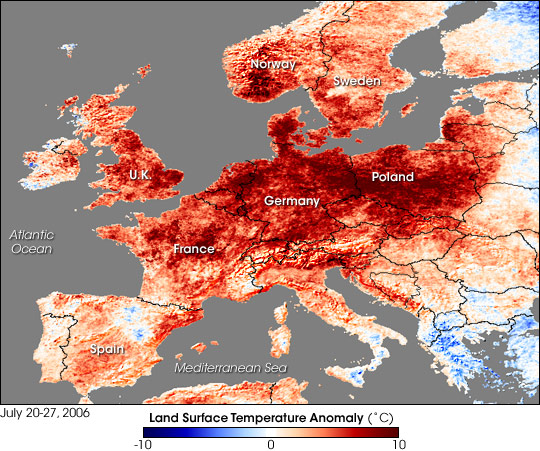 Western Europe continued to bake in late July 2006. Following an unusually warm spell between July 12 and 19, temperatures across most of the region remained much warmer than normal. This image shows land surface (as opposed to air) temperatures collected from July 20-27, 2006, compared to the average temperatures for that period over the past six years (2000-2005). Places that were up to ten degrees Celsius warmer than average are deep red, while places that were up to ten degrees cooler than average are deep blue. Places where the temperatures were average are white. The temperatures were measured by the Moderate Resolution Imaging Spectroradiometer (MODIS) on NASA’s Terra satellite.

In the center of the image, deep red areas of very warm temperatures spread across Germany, as well as France (to the west), and Poland (to the east). To the north (top center), both Norway (west) and Sweden (east) were much warmer than average. Only small pockets of the region were cooler than average: northeastern Spain, the “toe” of Italy’s boot and the western half of the island of Sicily, and parts of Greece (lower right).

July 2006 was a record-breaking month for heat in many Western European countries, coming in as the hottest July on record in several countries, including Belgium, Denmark, Ireland, the Netherlands, and the United Kingdom.

July brought sweltering heat to much of Western Europe in 2006.