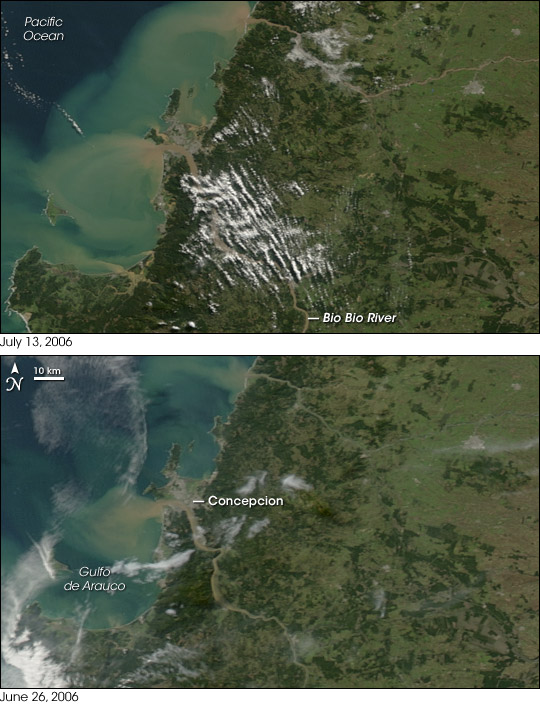 The swollen, mud-filled rivers of south-central Chile poured thick clouds of sediment into the Pacific Ocean on July 13, 2006, when the Moderate Resolution Imaging Spectroradiometer (MODIS) on NASA’s Terra satellite captured the top image. Two days of heavy rain triggered floods and landslides across a 1,300-kilometer-long swath of Chile, affecting 95,862 people, reported the International Federation of Red Cross and Red Crescent Societies. The most severely impacted region was Bio Bio, shown here, which the Chilean president declared a disaster zone.

The Bio Bio River, which shares the region’s name, was swollen on July 13 compared to conditions on June 26, lower image. The river flows northwest from the Andes Mountains (shown in the large images), and empties into the Pacific Ocean. The city of Concepcion, the regional capital, is the cement-colored area at the mouth of the river. The Bio Bio seems to have cut a new channel along the southwestern edge of the city, making an island of the southern spit of land nearest the river’s mouth. South of Concepcion, near the base of the wide “u” formed by the Gulf of Arauco, smaller rivers form a tan smear against the green landscape, an indication of further flooding. The large images show flooding in rivers extending for several kilometers north of Bio Bio.