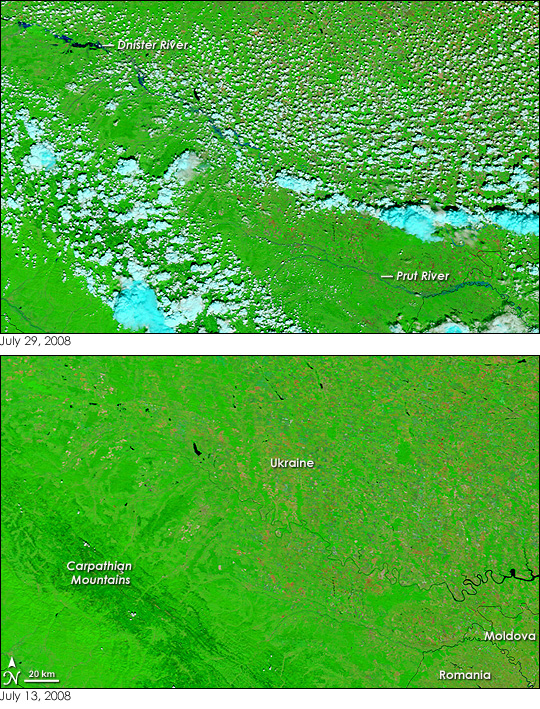 Heavy rain falling in the Carpathian Mountains of western Ukraine pushed the Dnister and Prut Rivers over their banks on July 27-28, 2008. The flooding, said the International Federation of Red Cross and Red Crescent Societies, was the worst the region had experienced in decades. The Moderate Resolution Imaging Spectroradiometer (MODIS) on NASA’s Terra satellite captured this view of the flooded rivers on July 29, a day after the floods peaked. In Ukraine, at least 22 people died in the storms and floods. Another five died in flooding in Romania, south of the region shown here, said the Associated Press.

The overflowing rivers are dark blue in this image, which includes a combination of visible and infrared light. Sections of the Dnister River and the Prut River are lighter in color than the most visibly flooded part of the Dnister River. The dusty blue color is from mingled water and mud and indicates that either the soil along the rivers is saturated or that the water is thick with sediment. A scattering of small clouds, bright turquoise and white in this type of image, partially obscures the flood scene.

According to the International Federation of Red Cross and Red Crescent Societies, the floods damaged 40,000 houses; 30,000 hectares of cropland; and 700 kilometers of roads in Ukraine. Though none of the damage is visible in this wide-view image, it is evident that agriculture is extensive in this part of Ukraine. Plant-covered land is bright green. The natural vegetation in the Carpathian Mountains is darker in tone than vegetation elsewhere. Fields of crops form extremely bright green spots on the image. Land that has been burned, probably to manage crops, is tan-red, while other non-vegetated land is tan.

Heavy rain falling in the Carpathian Mountains pushed rivers in Ukraine, Romania, and Moldova over their banks on July 27-28, 2008.