Widespread Fires in the Pacific Northwest 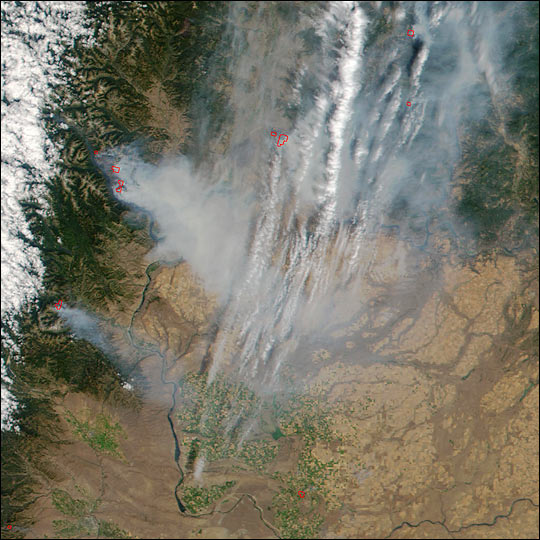 According to the National Interagency Fire Center (NIFC), there were 40 large wildfires burning in the western United States on August 20, 2001. (A "large fire" is defined as being uncontained and scorching more than 100 acres.) Altogether, these fires have consumed almost half a million acres of forest and rangelands. More than 28,500 firefighters and support personnel have been deployed to battle the blazes, with particular emphasis on the Pacific Northwest where drought conditions are in effect.

The true-color image above shows a number of active wildfires (red boxes) burning in Washington. This scene was acquired by the Moderate-resolution Imaging Spectroradiometer (MODIS) sensor on August 18. The fires have produced a large, greyish shroud of smoke and haze covering much of the region. The brighter, whiter streaks running north-south are overlying clouds.

Today, the U.S. Forest Service and NIFC are using a new tool to help them monitor active wildfires across the entire United States and decide how best to combat them. Flying aboard NASA's Terra satellite, MODIS collects data over the entire surface of the Earth almost every day. The regional perspective provided by MODIS, as well as the superior spectral and spatial resolution of the sensor's data, allow fire experts to more accurately determine the intensities of fires and better estimate their effects on regional air quality. These data also help scientists monitor plant regrowth in areas previously affected by wildfire. Thus, a new partnership was formed among the Forest Service, NASA, NOAA, the University of Maryland, and NIFC to use MODIS data in strategic ways that take advantage of each agency's unique resources and expertise.

With support from the Forest Service, NASA acquires MODIS data in near real time at Goddard Space Flight Center, Greenbelt, MD. The MODIS Land Rapid Response Team quickly produces images showing the locations of active fires. The satellite images are forwarded to the University of Maryland, where they are tailored for operational use by the Forest Service. The Forest Service then assembles the images into intelligence maps, called "active fire maps," that are updated daily to reveal the locations of actively burning fires as well as how they have progressed over the last 24 hours. By 6 a.m. local time, these maps are available via the Internet to regional and national fire management teams. The maps are used for strategic planning at a regional scale, rather than tactical decision making at a local scale.

The U.S. Forest Service and National Interagency Fire Center used a new tool to help monitor active wildfires across the entire United States and decide how to best combat them.