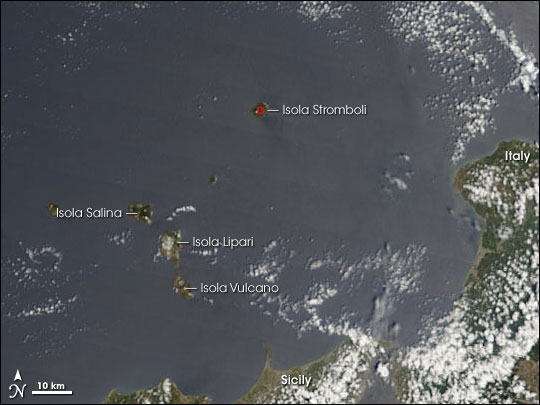 On July 2, 2006, the Moderate Resolution Imaging Spectroradiometer (MODIS) flying onboard NASA’s Terra satellite detected a hotspot on the volcanic island of Stromboli. A hotspot, shown here as a red outline, is an area of elevated surface temperatures. Nearby landmasses shown in this image include the islands of Salina, Lipari, and Vulcano, along with portions of Sicily and mainland Italy. The fairly light color of the ocean water results from sunglint, when the Sun’s light bounces off the water’s surface and into the satellite sensor. This image caught a period of relatively minor activity for the temperamental Stromboli Volcano.

Stromboli is a stratovolcano composed of layers of hardened volcanic ash, rocks, and lava flows. Nicknamed the “Lighthouse of the Mediterranean,” Stromboli has long attracted tourists with its nighttime eruptions. Stromboli Online provides a photo gallery of some of the volcano’s more spectacular eruptions.