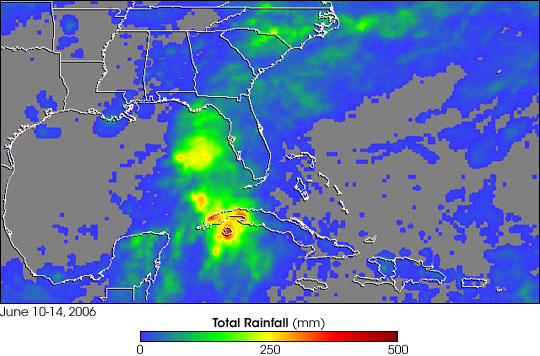 Alberto, the first storm of the 2006 Atlantic hurricane season, made landfall midday on June 13, 2006, along a remote section of the northeast Gulf coast of Florida. As the storm moved inland across north Florida, southeast Georgia, and South and North Carolina, it brought with it heavy but much-needed rain. Wild fires have been a problem across Florida, and the Southeast had been dry in general, so Alberto’s rains were beneficial.

This image shows rainfall totals from Alberto from June 10 through 14, 2006, for Florida and the surrounding region. The image is based on data from the Tropical Rainfall Measuring Mission (TRMM) satellite. The highest rainfall totals for the period (shown in red) were around 400 to 500 millimeters (14 to 20 inches), and they occurred over western Cuba. Widespread areas of rain cover Florida, Georgia, and South and North Carolina. Amounts in those areas are mostly less than 75 millimeters (5 inches), shown in blue. A band of 80 to 100 millimeters (6 to 8 inches) of rain (green and yellow areas) extends from central South Carolina eastward across eastern North Carolina. After making landfall, Alberto’s circulation interacted with a stationary weather front that was draped across the Southeast. The bulk of the rain fell east of the storm track. This is consistent with Alberto’s asymmetric structure due to the wind shear.

The TRMM satellite was placed into service in November of 1997. From its low-earth orbit, TRMM has been providing valuable images and information on tropical cyclones around the tropics using a combination of passive microwave and active radar sensors, including the first precipitation radar in space. TRMM’s observations are included in the near-real-time Multi-satellite Precipitation Analysis (MPA) produced at NASA’s Goddard Space Flight Center. TRMM is a joint mission between NASA and the Japanese space agency, JAXA.