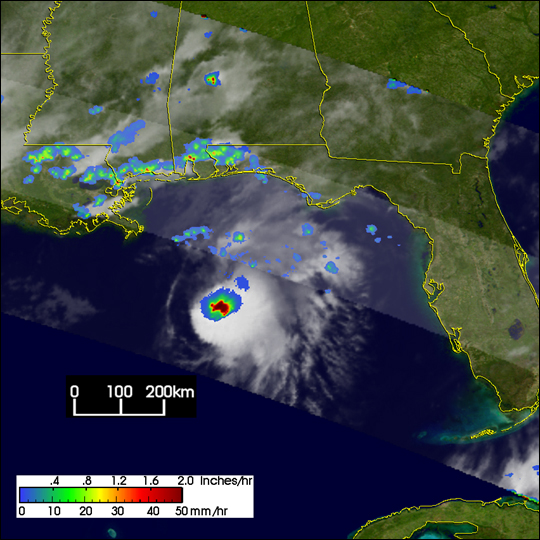 The 2004 Atlantic hurricane season continues to heat up as Tropical Storm Bonnie, the first of two currently active storms in the Atlantic, makes landfall along the panhandle of Florida. The Tropical Rainfall Measuring Mission (or TRMM) satellite has followed Bonnie's progress from a weak tropical depression east of the Lesser Antilles til landfall as a tropical storm along the northern coast of Florida. The images and data provided by TRMM can give valuable estimates of both storm location as well as estimates of storm intensity to the the NOAA Tropical Prediction Center (also known as the National Hurricane Center).

Bonnie first began as tropical depression number two (TD #2) on the 3rd of August 2004 approximately 350 miles east of Barbados. The first image was taken the next day at 08:14 UTC (4:14 am EDT) on 4 August 2004. The image displays the horizontal distribution of rain intensity obtained from the TRMM satellite. Rain rates in the center part of the swath are from the TRMM Precipitation Radar (PR), the first and only precipitation radar in space. The PR can provide fine resolution rainfall data and details on the vertical structure. Rain rates in the outer swath are from the TRMM Microwave Imager (TMI). The rain rates are overlaid on infrared (IR) data from the TRMM Visible Infrared Scanner (VIRS). The image reveals that TD #2 is rather poorly organized. No banding is evident in the rain field. The system does contain an area of heavy rain (red area) near the forward edge of the cloud shield between Barbados and St. Lucia and St. Vincent. At the time of the image, Bonnie was still a weak tropical depression with maximum sustained winds estimated at just 30 knots (35 mph) by the National Hurricane Center. The second image taken at the same time shows a vertical cross section through the heavy rain area from the PR. The rain area is associated with strong convection as evidenced by the deep tower (green area) above the heavy rain (red area). The view is looking north.

TD #2 however was not able to maintain itself and degenerated back into an open wave soon after entering the eastern Caribbean as a result of encountering unfavorable wind shear. Over the next several days, the wave tracked westward around the southern periphery of a subtropical ridge to its north before emerging into the Gulf of Mexico north of the Yucatan Peninsula. At this point the wave re-intensified into a tropical storm and became Bonnie. The next image shows Bonnie over the north central Gulf of Mexico as it is approaching the panhandle of Florida. The image was taken at 22:55 UTC (6:55 pm EDT) on Wednesday August 11. TRMM shows that Bonnie does not have an eye but that there is banding in the rain field east of the center (green arcs). Most of the rain including some that is heavy (red) is on the north and east side of the storm. At this time, Bonnie was a strong tropical storm with winds of 55 knots (63 mph). Bonnie was not able to intensify any further however as the storm was being pulled northeastward ahead of an upper-level trough. The final image taken just a few hours later at 03:49 UTC August 12th (11:49 pm EDT August 11) shows that Bonnie was a small storm. An isolated area of intense rain (dark red area) is all that remains. Winds were down to 50 knots (58 mph). Bonnie would make landfall the next day near Apalachicola, FL as a tropical storm.

The Tropical Rainfall Measuring Mission (or TRMM) satellite has followed Bonnie's progress from a weak tropical depression east of the Lesser Antilles to landfall as a tropical storm along the northern coast of Florida.