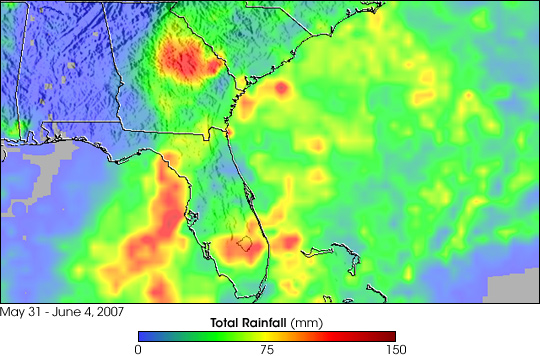 The official start of the 2007 Atlantic hurricane season on June 1 was marked by the formation of Tropical Storm Barry in the Gulf of Mexico, the second named storm of the season. Instead of being destructive, however, Barry delivered some much-needed rain to Florida and parts of the Southeast, which were suffering from severe drought conditions and numerous wild fires.

This image shows rainfall totals along the storm’s path from May 31 through June 4, 2007. The highest rainfall totals were on the order of 100–150 millimeters (4–6 inches). These areas of heavy rain over south-central Florida and east-central Georgia are marked in red. Lesser amounts of rain, on the order of 50 to 75 millimeters (2–3 inches; green to yellow areas), fell over most of peninsular Florida, the eastern half of Georgia and North and South Carolina. Despite the beneficial rains, most of the area remained in a drought.

The rainfall measurements shown here are from the Multi-satellite Precipitation Analysis, which is based on measurements taken by the Tropical Rainfall Measuring Mission satellite (TRMM). TRMM provides valuable images and information on tropical cyclones around the tropics using a combination of passive microwave and active radar sensors, including the first precipitation radar in space. TRMM is a joint mission between NASA and the Japanese space agency, JAXA.