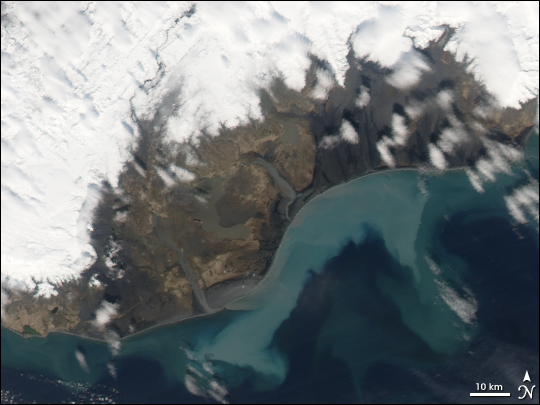 Most spring floods are triggered by rain or melting snow, but when the Skafta River of southern Iceland flooded in late April 2006, geologic activity may have been the driver. The river flows out from under the Vatnajokull Ice Cap, a large permanent field of snow and ice that covers more than 8,000 square kilometers of southeastern Iceland, including a number of volcanoes and other regions of geothermal activity. Over these hotspots, the lower layer of the ice cap melts to form glacier lakes, some of which drain into the Atlantic Ocean through rivers such as the Skafta. Other lakes are dammed by walls of ice from the overlying glacier. Catastrophic floods can occur when water breaks through the ice dams and bursts into the rivers, or when geologic activity increases and melts more water.

On April 22, 2006, floods swamped the Skafta River. The flood water was accompanied by dangerously high levels of sulfur, possibly from increased geologic activity, prompting the Civil Protection Department to issue a warning, said local news reports. In flood, the fast-moving river swept over the dark, volcanic soil west of the ice cap, and carried it into the ocean. The ocean was milky green with sediment when the Moderate Resolution Imaging Spectroradiometer (MODIS) on NASA’s Aqua satellite captured this image on April 27.