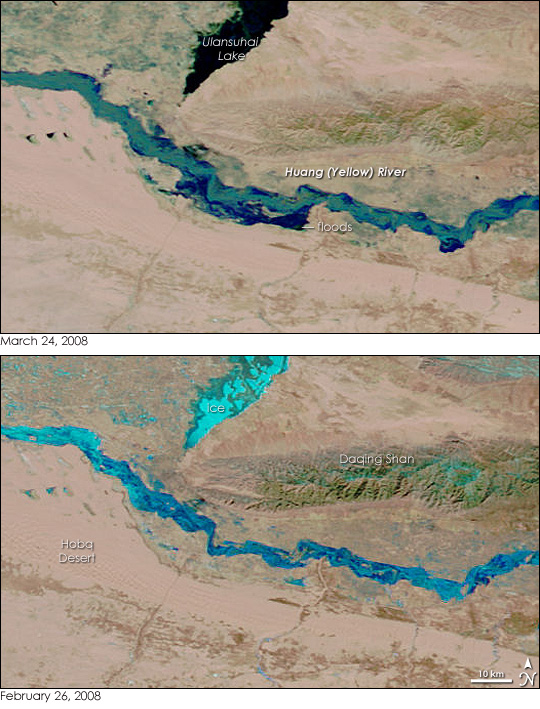 Spring floods happen for many reasons. They occur when spring rains fall. They occur when snow and ice melt, and they occur when ice melts too slowly, blocking the flow of a river. The latter was in the case on China’s Yellow (Huang) River in March 2008. Harsh winter conditions left the heaviest ice flow on the river in 40 years, said China’s Ministry of Water Resources. The Yellow River bends north in a giant upside-down “U” through Inner Mongolia before turning south to warmer climes. Thick ice gathered at the top of the “U”, and this ice blocked the flow of water from the thawing river to the south. Water built behind the ice dam until the river channeled 50 percent more water than in other springs, said the Ministry of Water Resources. On March 19, the Yellow River burst through sections of its main embankment and flooded surrounding homes. About 13,000 people were evacuated in the flood, said the government.

The Moderate Resolution Imaging Spectroradiometer (MODIS) on NASA’s Terra satellite captured this image of the floods on March 24, 2008. The lower image was taken on February 26, before the river melted. In both images, ice coats the river. The ice is turquoise in this type of image, which is made with both infrared and visible light, though the melting ice in the top image is darker in tone. Liquid water, by contrast, is dark blue or black. In the top image, blue lines the river where water flows under and around the ice. The Yellow River is generally swollen when compared to February 26, and it seems to have broken through embankments on its southern banks, where water has pooled over tens of kilometers. Some of these floods may be deliberate. The government planned to channel water away from populated regions near the breeched embankment into an old river bed, said the Ministry of Water Resources on March 24. The government also redirected water from the Yellow River into Ulansuhai Lake for the first time to try to alleviate flooding.