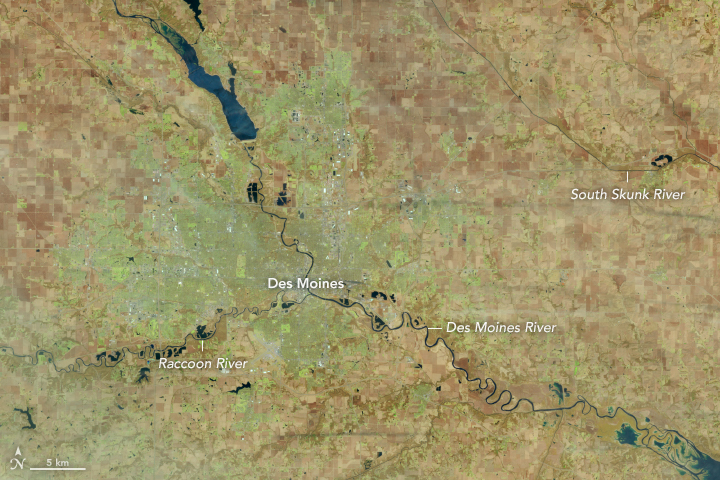 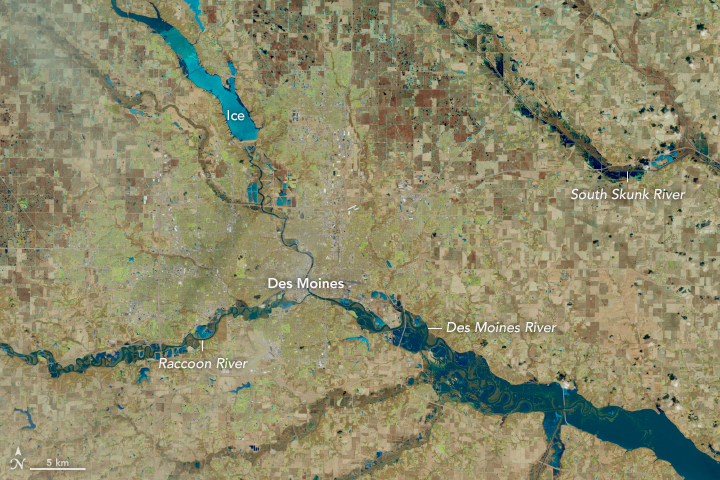 Although floods hit Nebraska the hardest, March 2019 brought unusually swollen, ice-choked rivers to Iowa as well. With the state blanketed with snow and just beginning to thaw out from an unusually cold February, many of Iowa’s waterways were capped with thick ice in the beginning of the month.

After an intense “bomb cyclone” delivered heavy rain and a blast of warm air, the ice began to break up and flow downstream. However, ice chunks tend to clump together in sharp meanders or behind bridges, slowing the flow of water and creating “ice jams.” In addition to exacerbating flooding, ice jams can cause significant damage as chunks of ice grind against levees, dams, homes, and other infrastructure.

The Operational Land Imager (OLI) on Landsat 8 acquired this false-color image (bands 6-5-4) of flooding around Des Moines on March 18, 2019. For comparison, the second image shows the same area in March 2018. Large amounts of water (dark blue) and ice (light blue) had backed up behind the Saylorville and Red Rock dams. Of the waterways in the Des Moines area, the Raccoon River faced some of the most serious flooding, partly because its sharp meanders make it especially prone to ice jams.

The image below, acquired by Landsat on the same date, shows an ice jam in the Iowa River near Iowa Falls. Volunteers came together to build sandbag barriers around wells and other key infrastructure as floodwater and ice chunks as large as dinner tables invaded roads and yards in the town, according to local news reports. 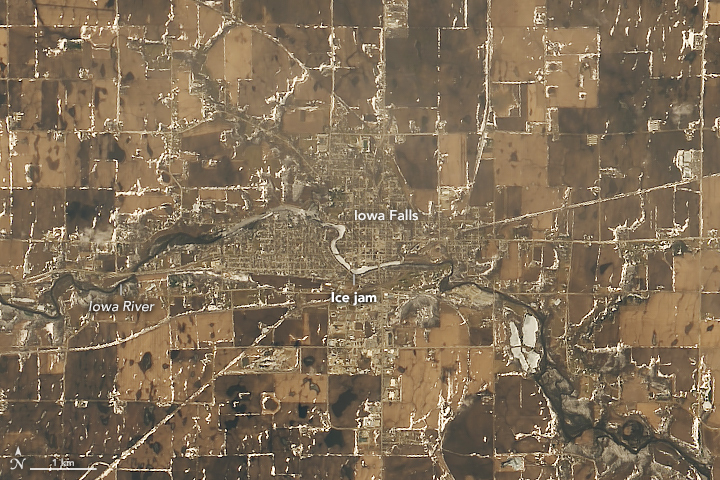 Several other communities in Iowa also faced problematic ice jams in March. In Lehigh, a community 120 kilometers (80 miles) north of Des Moines, ice jams triggered floods on the Des Moines River that swamped several homes and forced many residents to evacuate. A similar situation played out in Outtumwa, another town along the Des Moines River. In Cedar Falls, sheets of ice plowed into yards, porches, and homes along the Cedar River.