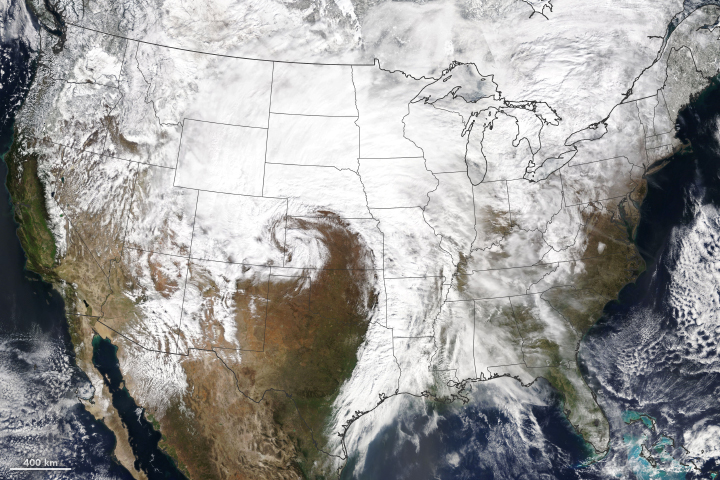 With the first day of spring less than one week away, a severe late-winter storm brewed across the middle of the United States. Blizzard conditions struck the Central and Northern Plains, while thunderstorms and flooding threatened the Lower Mississippi, Tennessee, and Ohio Valleys.

The natural-color image above shows the extent of the storm clouds on March 13, 2019. The image is a mosaic, acquired by the Moderate Resolution Imaging Spectroradiometer (MODIS) on NASA’s Terra and Aqua satellites. 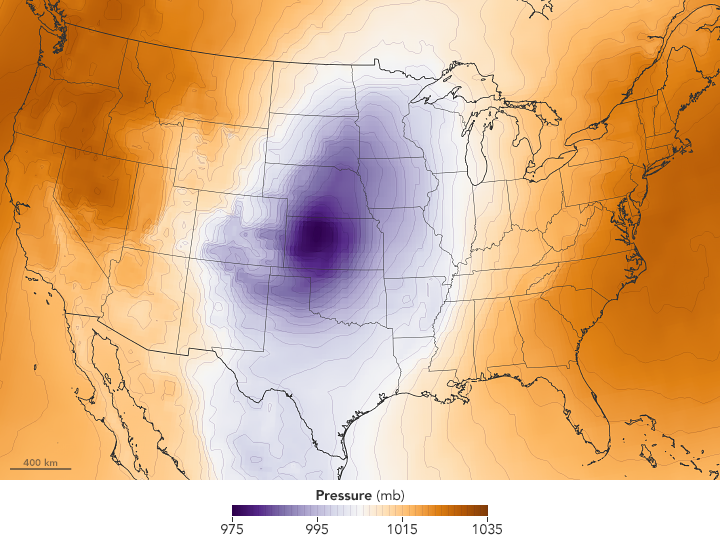 The storm’s intensity grew due to a rapid drop in atmospheric pressure that in some places reached record lows. This map shows surface level pressure on March 13, when the storm center was over Kansas. Slightly earlier that day, the pressure bottomed out at least 968 millibars (29 inches of mercury), according to news reports.

Winds blow from areas of high pressure to low pressure, and larger differences in pressure lead to stronger winds. This storm delivered damaging wind gusts equivalent to a category 1 hurricane.

It’s important to note that this low-pressure system, also called a “mid-latitude cyclone,” was not a hurricane. Meteorologist Marshall Shepherd explained the difference in a write-up in Forbes. One difference is that low-pressure systems form along weather fronts, where they derive energy from contrasting air masses; hurricanes get their energy from a warm ocean surface.

Despite the differences, mid-latitude cyclones can deliver severe, damaging weather. By one estimate, high winds affected more than 1 million square miles of the United States.