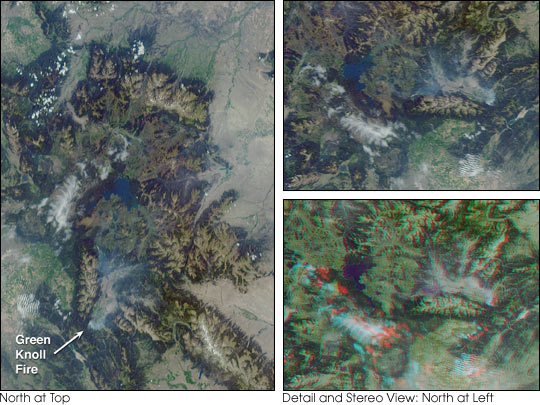 The area around Jackson Hole, Wyoming, where the Green Knoll forest fire has raged for many days, is shown in these Multi-angle Imaging SpectroRadiometer (MISR) images acquired on July 27, 2001.

At the left of this image set is a true-color view from MISR's 70-degree forward-viewing camera, covering an area of about 240 kilometers by 340 kilometers (149 by 211 miles). The oblique angle of view accentuates the visibility of smoke, which can be seen as a thin bluish-white haze over the Jackson Hole valley. At the top right is a cropped version of this picture, rotated counterclockwise to facilitate comparison with the stereo anaglyph beneath it. The anaglyph was created from MISR's 70-degree and 60-degree forward views and requires a rotated orientation in order to produce a 3-D effect. Viewing the anaglyph in stereo helps to visualize the local topography and to differentiate the Green Knoll smoke plume from the higher nearby clouds. Stereoscopic viewing requires red/blue glasses with the red filter placed over your left eye.

Yellowstone Lake is visible at the center of the left-hand image and is surrounded by Yellowstone National Park, the world's oldest national park. To the west of Jackson Hole is the Teton Range, with the 4,196-meter (13,766-foot) high peak of Grand Teton. At the lower right of the left-hand image is the Wind River Range, containing Gannett Peak, the highest point in Wyoming, rising 4,207 meters (13,804 feet) above sea level. The Continental Divide runs through this range.

Due to this year's low humidity, officials from the Grand Teton National Park and Bridger-Teton National Forest Interagency Fire Management Office announced a high risk for the area. The Green Knoll blaze, suspected to have been sparked by a campfire, is burning a few kilometers, or miles, southwest of the town of Jackson. About 1,860 hectares (4,600 acres) have been scorched by the fire. Mandatory evacuations of some of the subdivisions near the town of Wilson were ordered. On July 27, the fire had crept to within 300 meters (about 1000 feet) of buildings. By July 29, the fire was reported to be 60-70 percent contained, thanks to the efforts of more than 1,000 firefighters and the assistance of about one-fourth of the nation's air tankers. Improved weather conditions, including lighter winds, cooler temperatures and higher humidity, also helped matters. More information is available at the Grand Teton National Park and US Forest Service shared interagency website, http://www.tetonfires.com.

Hundreds of visitors to Glacier National Park were forced to flee their campgrounds and cabins because of a wildfire near Saint Mary Lake.