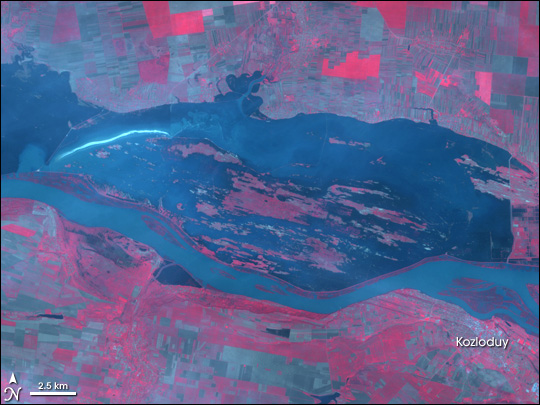 Floods along the Danube River forced more than 5,000 Romanians from their homes between April 25 and April 26, 2006, reported Reuters. Approximately half of the evacuations were in the section of southwestern Romania shown in this image and the region immediately surrounding it. The image was taken by the Advanced Spaceborne Thermal Emission and Reflection Radiometer (ASTER) on NASA’s Terra satellite on the morning of April 26. Dark blue water spreads across the farmland lining the north side of the river. Faint lines—roads or perhaps dikes—are visible within the flood, hinting that the water covers a populated or developed area. An uneven white line arcs across the floodwater on the left side of the image. This appears to be a wide area of turbulence where water is rushing through a broken dike. Dikes along the Danube were under pressure as water levels on the river reached record highs, and flood defenses in the region shown here were reported to have failed.

On both sides of the river, the geometrical grid of grey and red reveal that the area is heavily farmed. Fields in which crops are growing are red, while bare earth is grey. The grey is condensed into a tight grid in populated regions, such as the Bulgarian village, Kozloduy, on the south shore of the river.

The Danube, Europe’s second longest river, was swollen with spring snowmelt and rains for much of April. Floods along the river caused extensive damage in several European countries including Romania, Bulgaria, Serbia, and Hungary. Further damage was caused in other Central European countries when other rivers, such as the Tisza, filled with spring run-off. Many of those rivers are tributaries to the Danube.