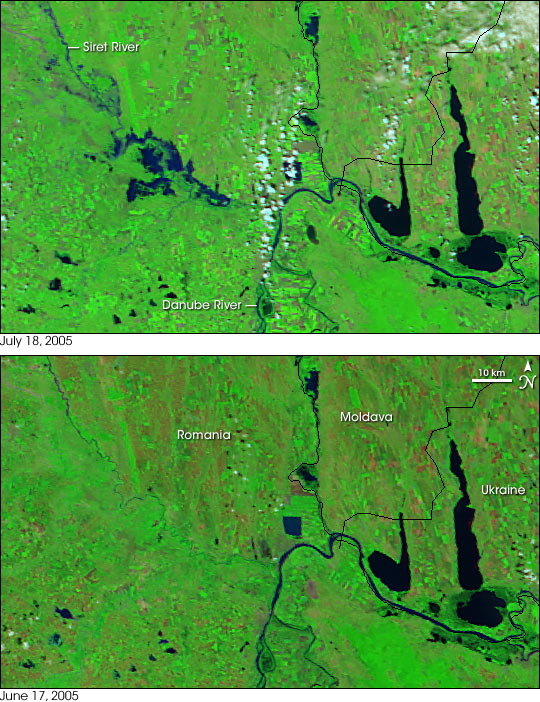 For the second time in four months, Romania is being faced with severe flooding. The current floods, which began in early July, have forced more than 13,000 people from their homes, the Romanian government reports, and are being considered the worst floods to hit the country in the past 50 years. The top Moderate Resolution Imaging Spectroradiometer (MODIS) image shows the most severe flooding along the Siret River. The image was taken on July 18, 2005, by NASA’s Terra satellite. It displays water as dark blue or black, vegetation as bright green, and clouds as light blue and white. The lower image was also acquired by MODIS on the Terra satellite and shows the river in normal conditions.

Floods have covered thousands of hectares of farmland across Romania. In these images, farm fields are tiny brilliant green and tan squares. In contrast, natural vegetation has a smooth, slightly darker green appearance and covers irregularly shaped areas. Several square fields are prominently visible along the edge of the flooded area in the top image. The images show the floods at MODIS’ maximum resolution of 250 meters per pixel.

The spring, summer, and early fall of 2005 brought widespread flooding to Romania and Bulgaria. A series of floods caused extensive damage and evacuations across both countries.