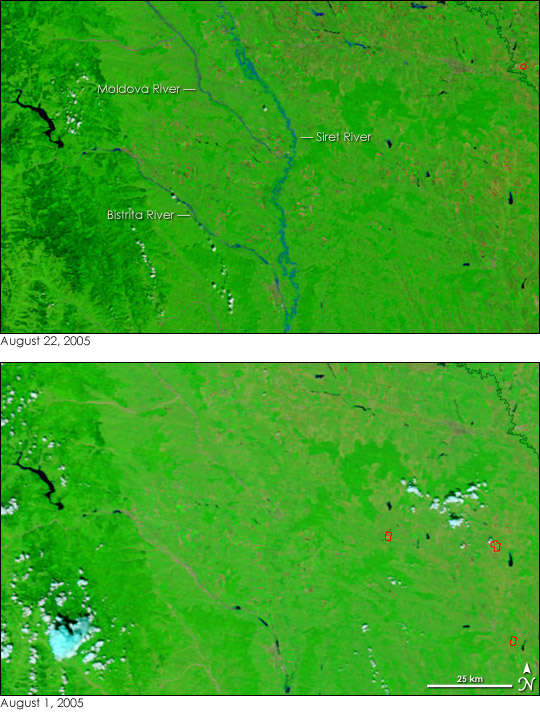 Rivers that were barely visible on August 1, 2005, broadened into the strips of blue seen in the top image as a fresh round of flooding took hold in Romania in mid-August. Both Romania and Bulgaria have suffered a series of floods throughout the spring and summer of 2005. The most recent floods, like the others, were triggered by days of torrential rain. The August floods have killed 16 in Romania and 20 in Bulgaria, according to news reports.

The floods were visible in satellite imagery collected on August 22, top. The images show sections of the Siret, Moldava, and Bistrita Rivers in northern Romania, all three of which were flooded. Both the August 22 and August 1 images were acquired by the Moderate Resolution Imaging Spectroradiometer (MODIS) on NASA’s Terra satellite. The images are shown in false color to provide a greater contrast between water and the surrounding countryside. In these images, water is blue, vegetation is bright green, bare land is tan, and clouds are pale blue and white. Red boxes outline the locations of fires.

The spring, summer, and early fall of 2005 brought widespread flooding to Romania and Bulgaria. A series of floods caused extensive damage and evacuations across both countries.