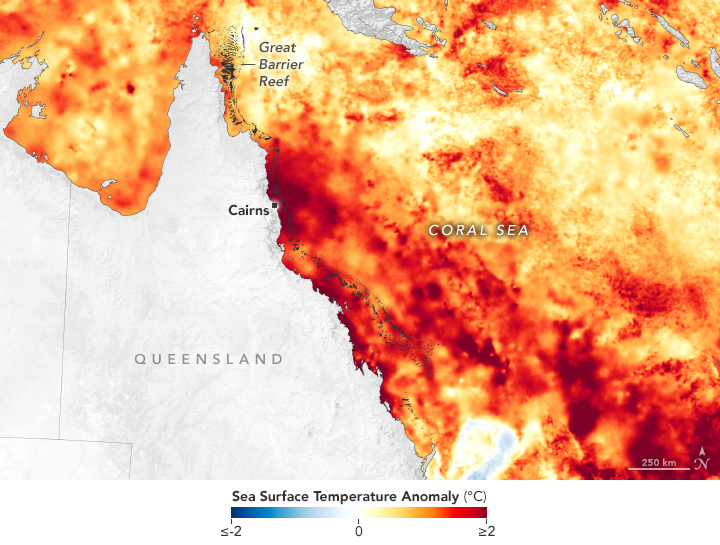 After conducting aerial surveys of more than 750 reefs in the marine park, the Australian government’s Great Barrier Reef Marine Park Authority confirmed in late March that a mass bleaching event had occurred. It was the sixth such widespread bleaching event of the reef since 1998.

“This assessment of bleaching at multiple reefs in all four management areas confirms a mass coral bleaching event on the reef, the fourth since 2016, and despite La Niña conditions over this summer,” said David Wachenfeld, chief scientist for the reef authority in a March 25 video update on reef health.

La Niña is the cooler phase of the El Niño Southern Oscillation, during which coupled atmospheric and ocean circulation patterns in the tropical Pacific alter global climate. La Niña conditions typically bring more rain and cooler temperatures over the reef, according to Australia’s Bureau of Meteorology.

Bleaching events are caused by sustained, warmer-than-average sea surface temperatures (SSTs). Corals have a symbiotic relationship with photosynthetic algae known as zooxanthellae, which provide the coral polyps with nutrients as well as their bright colors. Heat stress causes the corals to expel the zooxanthellae, leaving the skeletal structures with a “bleached” appearance.

The most recent episode of warming began with SSTs rising in the waters off Queensland in December 2021, according to NOAA Coral Reef Watch. NOAA researchers monitor SST data from four stations along the 2,300-kilometer (1,400-mile) length of the reef.

In early March 2022, water temperatures spiked and stayed high for several weeks, creating marine heatwave conditions. The map above shows the SST anomalies off the northeast coast of Australia on March 14, 2002, when many areas were more than 2°C (3.6°F) warmer than normal. (Rather than showing absolute temperature, the anomaly reflects the difference between the daily SST and the 12-year average SST from 2003 through 2014.)

The aerial surveys found that bleaching matched the pattern of heat stress seen in satellite imagery. Bleaching affected both inshore and offshore reefs in all four management areas (the Far Northern, Cairns–Cooktown, Townsville–Whitsunday, and Mackay–Capricorn), but was most severe in the northern and central sections.

“As always, I want to emphasize that bleached coral is stressed but still alive,” said Wachenfeld in March. “If the water temperature decreases, bleached corals can recover from this stress. It is important to remember that we had a mass bleaching event in 2020 but there was very low coral mortality.” 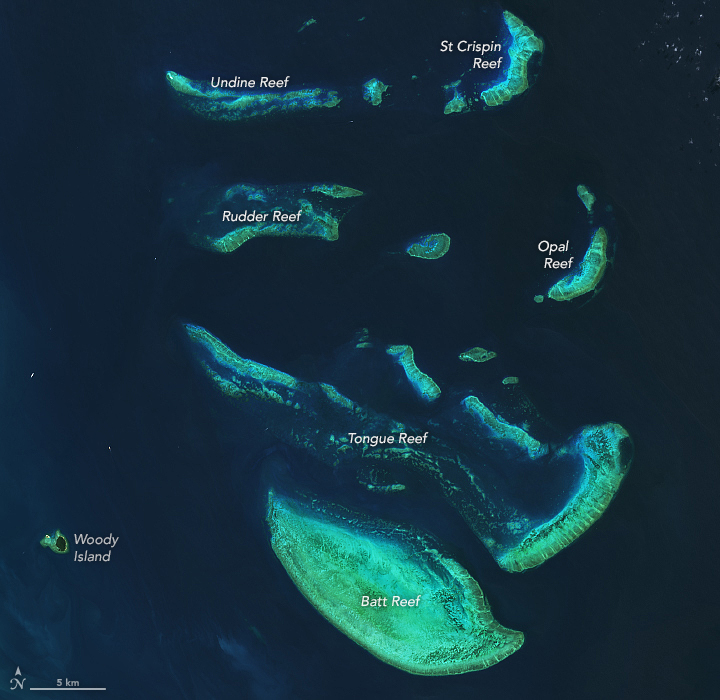 The image above, acquired by the Operational Land Imager (OLI) on Landsat 8, shows an area of the reef just north of Cairns on August 22, 2020, a few months after the 2020 bleaching event ended and many corals were able to recover.

This year, water temperatures across the reef had started to fall by April 1, 2022, but remained about one degree above average for this time of year. “There is some mortality in some places. But in other places, even though corals are bleached, it's not very intense,” Wachenfeld said in the weekly reef health update. “We would expect those corals to recover in the next few weeks.”

In addition to being a La Niña year, 2021 tied 2018 as the sixth-warmest year on record, according to independent analyses from NASA and the National Oceanic and Atmospheric Administration (NOAA). NASA scientists estimate that the La Niña ocean conditions may have cooled global temperatures by about 0.03°C (0.06°F) from what the average might have been.

As the climate warms, mass bleaching events are lasting longer, becoming more frequent, and are affecting reefs that had never bleached before, according to NOAA Coral Reef Watch. Between 2014 and 2017, the Great Barrier Reef, along with other reefs around the world including in the Caribbean and Hawaii, experienced a global bleaching event that is now considered the longest, most widespread, and most damaging coral bleaching event on record.

“Impacts from climate change and extreme weather are a reminder of the importance of global greenhouse gas emissions reduction and strong marine management actions that support the resilience of this magnificent living ecosystem,” Wachenfeld said.

Known as one of the richest and most biodiverse natural ecosystems on Earth, the Great Barrier Reef was designated a UNESCO World Heritage site in 1981.

It was the sixth such widespread bleaching event of the reef since 1998, and the first to occur during La Niña conditions, which are typically cooler. 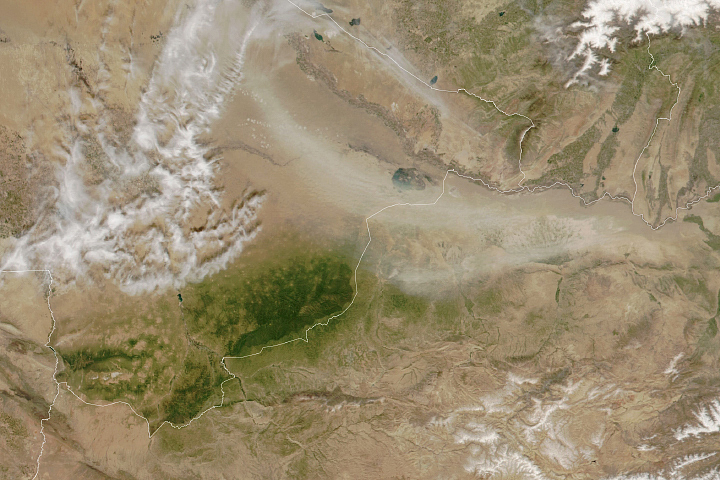 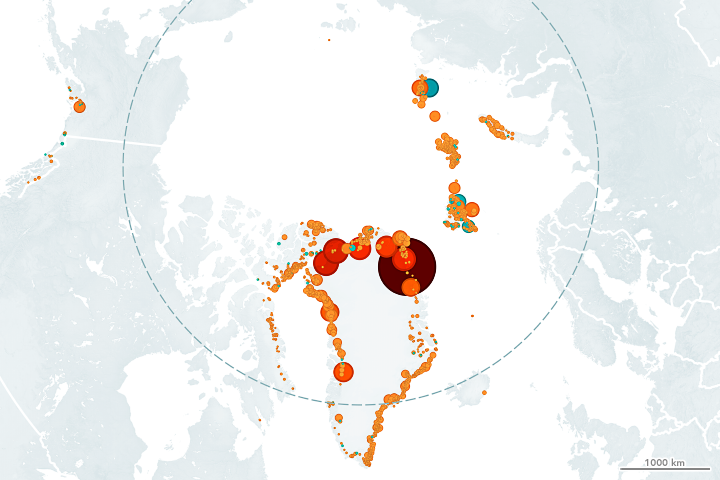 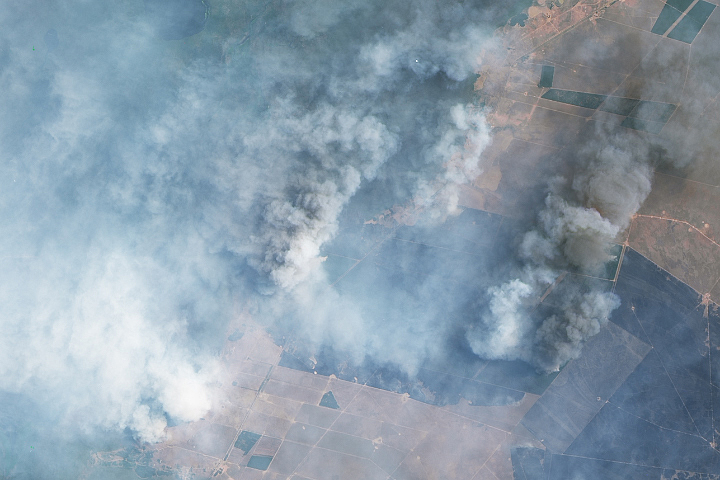 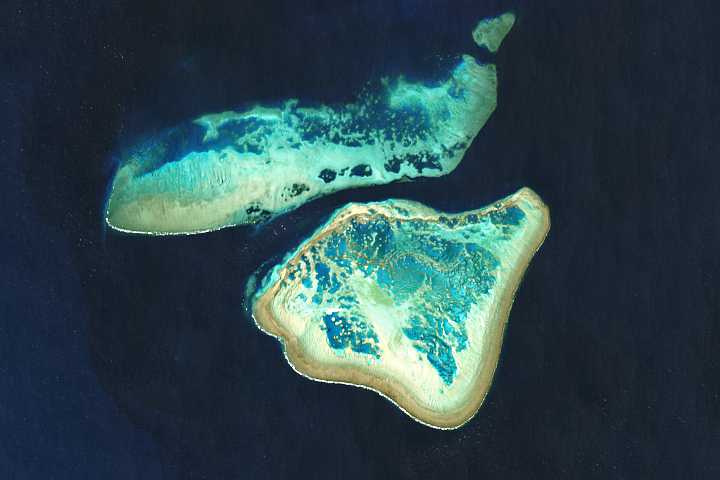