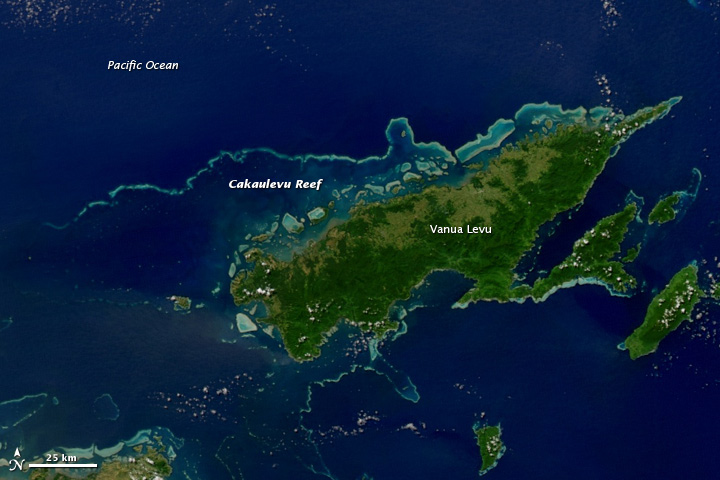 Surrounded by the warm waters of the South Pacific, the Fiji Islands are often cloaked in clouds when the Aqua or Terra satellites fly over. But July 21, 2011, offered up a perfectly cloud-free view. This image from the Moderate Resolution Imaging Spectroradiometer (MODIS) on Aqua shows Fiji’s second-largest island, Vanua Levu, and the Cakaulevu Reef that shelters the island’s northern shore.

Also called the Great Sea Reef, Cakaulevu shines turquoise through clear, shallow waters. It is the third longest continuous barrier reef in the world, behind the Great Barrier Reef in Australia and the Mesoamerica Reef off Central America. When combined with the nearby Pascoe Reef, Cakaulevu Reef is about 200 kilometers (120 miles) long. On its own, the Cakaulevu Reef covers 202,700 square kilometers (77,200 square miles).

The first systematic survey of the reef (in 2004) revealed a diverse marine population, including unique mangrove ecosystems and endemic fish. Twelve threatened species live within the reef: 10 fish species, the green turtle, and the spinner dolphin.

All of this marine life has traditionally supported the native population, and currently some 70,000 people depend on the reef. After seeing fish populations decline in recent decades, local leaders created a series of marine protected areas in 2005 where fishing is prohibited. Traditional customs used to manage the reef for hundreds of years permit leaders to set aside portions of the qoliqoli, or traditional fishing ground. Where the ban has been enforced, fish populations are rebounding and spilling over into areas where fishing is permitted.

From space, none of this bounty is visible. Instead, the beauty comes from the vivid shades of blue and green coral creates when viewed through water.