Agriculture Fans Out in Turkmenistan 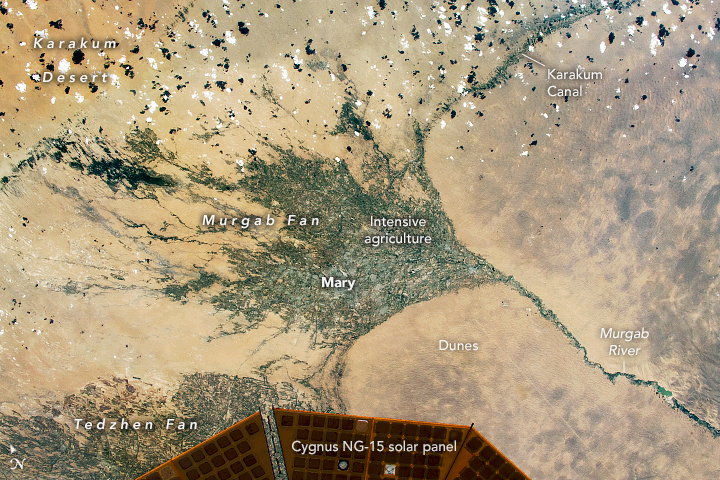 While observing from the International Space Station (ISS), an astronaut took this photograph of part of the Karakum Desert in Turkmenistan. The dark-toned crops—mainly wheat and cotton—stand out against the light-toned sand dunes. This area of intensively farmed soil occupies fan-shaped landscape features known as the Murgab and Tedzhen fans.

Agricultural fields occupy more than 200 kilometers (120 miles) of the large Murgab fan. The cityscape of Mary stands amidst the fields.

The crops, and the people of Mary, need water in this desert, and it is channeled from two sources. The first is the Kopet Dagh Mountains (just outside the image, lower right). The prominent Murgab River carries water down from the mountains to the fan, and a network of smaller canals lead it far into the desert (top left). The neighboring irrigated Tedzhen fan is also fed by water from the Kopet Dagh.

The second source is the long Karakum Canal, which draws water from the largest river in the region, the Amu Darya (outside the image, top right). Nearly 250 kilometers (155 miles) of the canal appears in this image. At 1375 kilometers (854 miles), the Karakum Canal is one of the largest in the world and is navigable over much of its length.

A solar panel on the Cygnus NG-15 resupply vehicle appears in the foreground along the bottom of the image. Near the top, scattered puffy clouds cast dark shadows on the desert.

Astronaut photograph ISS065-E-111045 was acquired on June 13, 2021, with a Nikon D5 digital camera using a focal length of 1150 millimeters. It is provided by the ISS Crew Earth Observations Facility and the Earth Science and Remote Sensing Unit, Johnson Space Center. The image was taken by a member of the Expedition 65 crew. The image has been cropped and enhanced to improve contrast, and lens artifacts have been removed. The International Space Station Program supports the laboratory as part of the ISS National Lab to help astronauts take pictures of Earth that will be of the greatest value to scientists and the public, and to make those images freely available on the Internet. Additional images taken by astronauts and cosmonauts can be viewed at the NASA/JSC Gateway to Astronaut Photography of Earth. Caption by Justin Wilkinson, Texas State University, JETS Contract at NASA-JSC.

Fed by mountain streams and a canal, the Murgab and Tedzhen fans are irrigated farming oases in arid Central Asia. 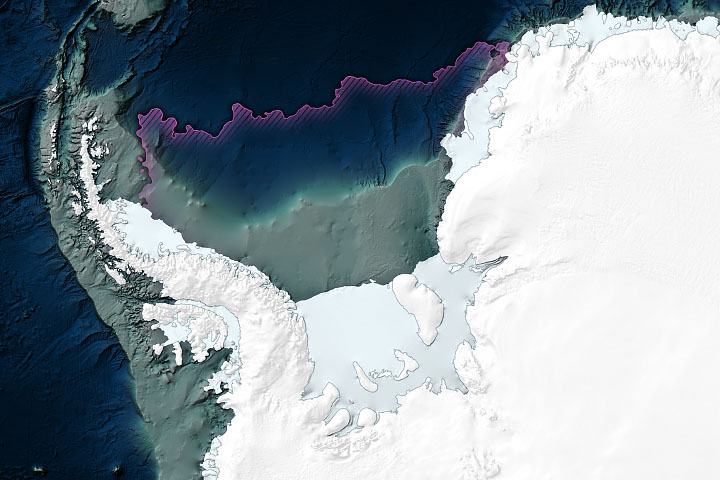 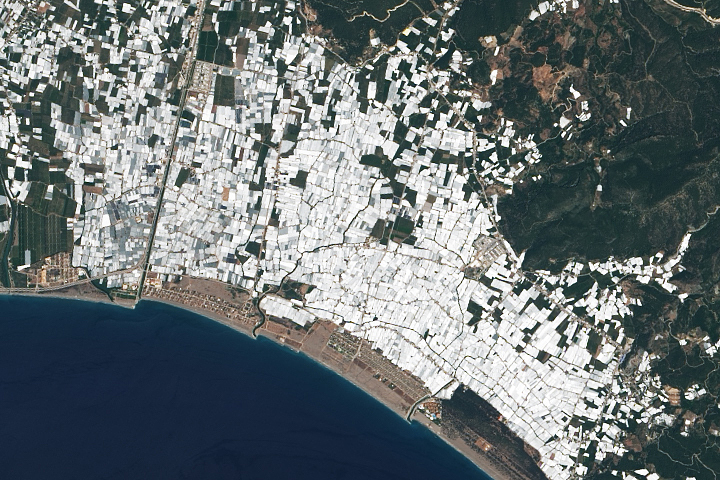