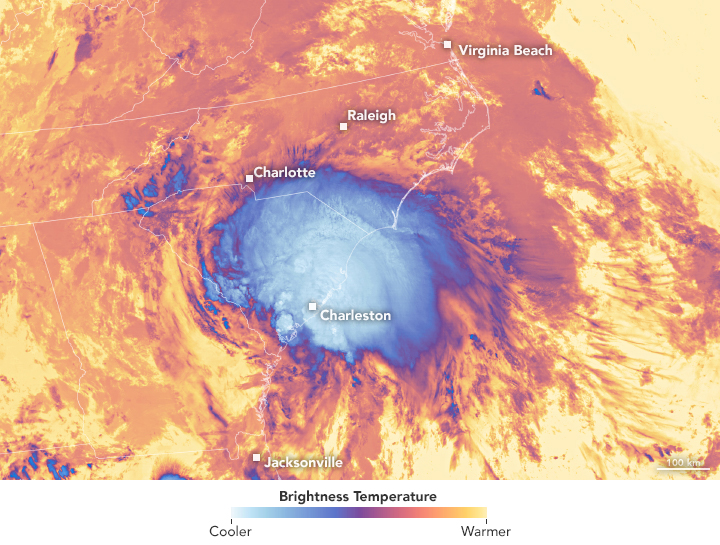 Tropical Storm Elsa continues its march up the eastern coast of the United States. On July 8, 2021, National Weather Service forecasters warned of heavy rain, flash flooding, and gusty winds from the Carolinas to the Maine coast and Canadian Maritimes through the weekend.

The Visible Infrared Imaging Radiometer Suite (VIIRS) on the NOAA-20 satellite acquired this image of Tropical Storm Elsa around 3 a.m. Eastern Daylight Time on July 8, 2021. Around the time of the image, Elsa had sustained winds of 60 miles (95 kilometers) per hour. Clouds are shown in infrared using brightness temperature data, which is useful for distinguishing cooler cloud structures from the warmer surface below and for showing finer details of a storm. The coolest temperatures are generally associated with the tallest clouds. 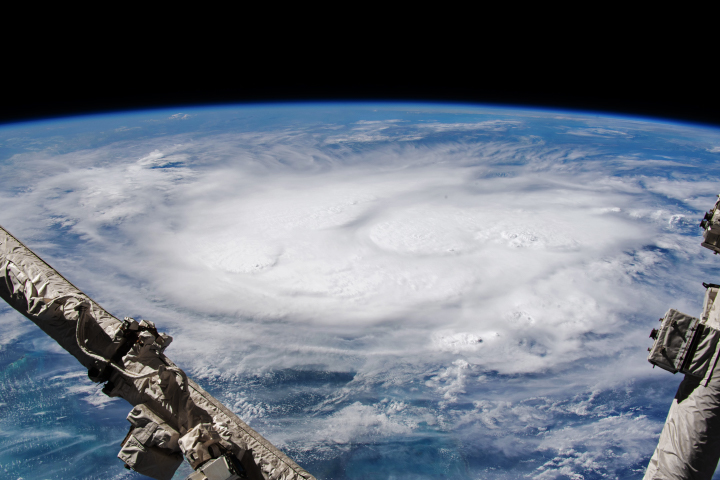 Earlier in the week, an astronaut shot this photo from the International Space Station. It shows Elsa on July 4 as the storm advanced across the Caribbean Sea toward Jamaica and Cuba.

The storm first developed off the coast of South America on July 1. By the next day, Elsa briefly strengthened into the first hurricane of the 2021 Atlantic season. Though wind speeds have not exceeded tropical storm force since July 3, the storm has brought heavy rain and wind damage to Barbados, St Lucia, Jamaica, Cuba, Florida, and Georgia so far. Use NASA Worldview to watch a time-lapse view of the storm.

NASA Earth Observatory image by Lauren Dauphin, using VIIRS data from NASA EOSDIS LANCE, GIBS/Worldview, and the Suomi National Polar-orbiting Partnership. Astronaut photograph ISS065-E-156511 was acquired on July 4, 2021, with a Nikon D5 digital camera using an 50 millimeter lens and is provided by the ISS Crew Earth Observations Facility and the Earth Science and Remote Sensing Unit, Johnson Space Center. The image was taken by a member of the Expedition 65 crew. The image has been cropped and enhanced to improve contrast, and lens artifacts have been removed. Caption by Mike Carlowicz.

The first hurricane of the Atlantic season made a series of landfalls and dropped abundant rain from the Caribbean to the U.S. East Coast.