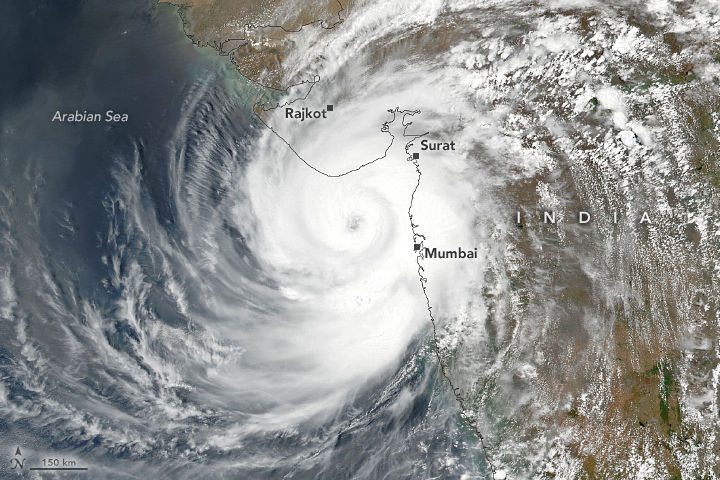 An unusually powerful tropical cyclone named Tauktae struck the Indian state of Gujarat on May 17, 2021. The Visible Infrared Imaging Radiometer Suite (VIIRS) on the NASA-NOAA Suomi NPP satellite acquired this natural-color image of the storm a few hours before it made landfall between Porbandar and Mahuva.

As Tauktae approached land, the U.S. Joint Typhoon Warning Center reported maximum sustained winds of 100 knots (185 kilometers/125 miles per hour) and gusts up to 125 knots (230 kilometers/145 miles), equivalent to a category 3 or 4 hurricane. That made Tauktae the fifth-strongest storm observed in the Arabian Sea since 1998. Winds of that strength can easily snap trees, topple power lines, and damage homes. The storm also pushed a destructive storm surge of water onto the Indian coast; reports suggest it may have been as high as 3 meters (10 feet) in some areas.

Even before making landfall, Tauktae caused a trail of destruction in Kerala, Karnataka, Goa, and Maharashtra as it brushed India’s northwest coast over the weekend. According to news reports, the storm contributed to the deaths of at least 12 people, destroyed hundreds of homes, and caused power outages and traffic jams. More than 150,000 people evacuated Gujarat in anticipation of Tauktae’s arrival.

The North Indian Ocean generates only about 7 percent of the world’s tropical cyclones, but storms can be quite devastating when they occur because of the large number of people who live along low-lying coastlines. Compared to the Bengal Sea to the east, cyclones are uncommon in the Arabian Sea, an area that typically sees one or two storms per year. Cool water temperatures, dry air, and unfavorable upper-level winds typically make storms in the Arabian Sea weak and short-lived, though powerful storms occasionally come together under the right environmental conditions.

In Tauktae’s case, conditions were ideal. Upper-level winds were calm and conducive to storm formation. Sea surface temperatures in the Arabian Sea were about 31° Celsius (88° Fahrenheit) as the storm approached Gujarat, a few degrees warmer than usual for mid-May. A rule of thumb among scientists is that ocean temperatures should be above 27° C to sustain a tropical cyclone.

During the past few decades, a group of NOAA researchers have observed an increase in the intensity of tropical cyclones in the Arabian Sea, particularly in the post-monsoon season. The group’s modeling results indicate that global warming and rising ocean temperatures are among the reasons for the change. 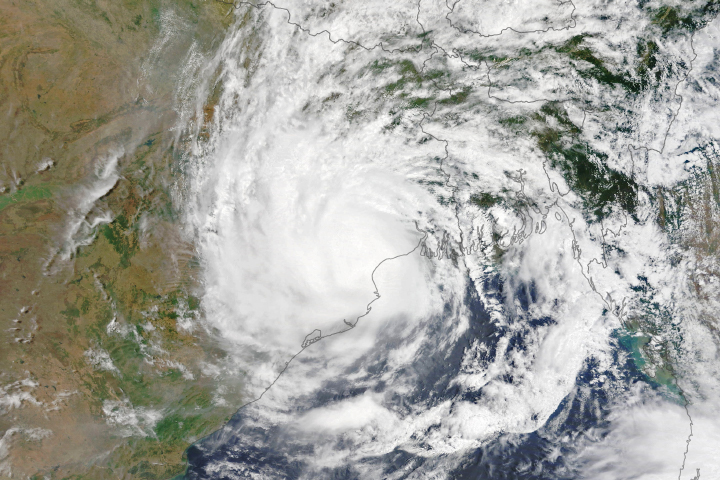