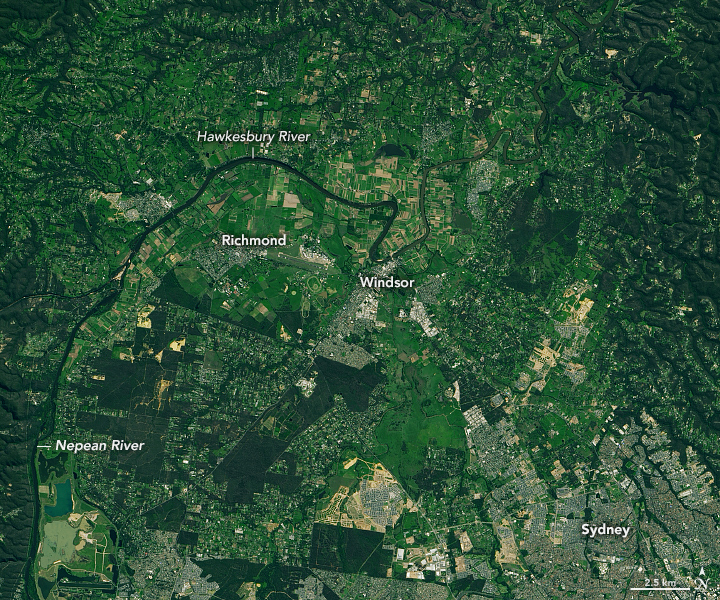 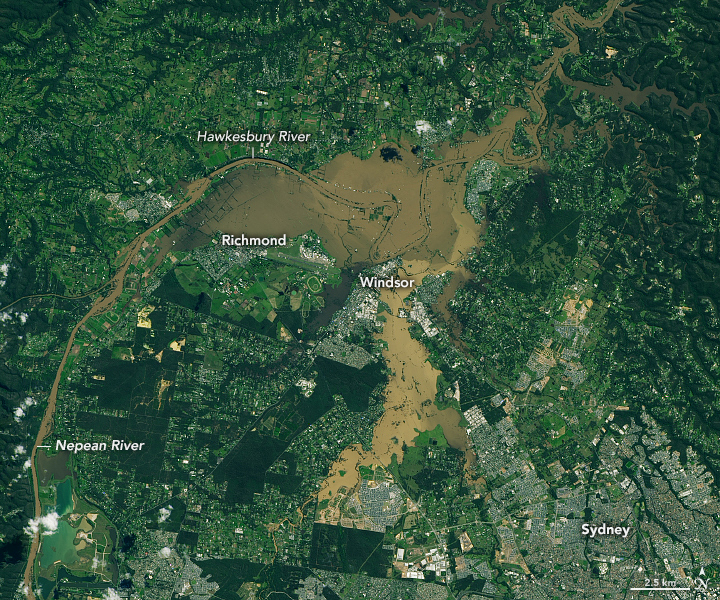 Persistent, heavy rain fell for several days in early autumn in New South Wales, Australia, leading to the region’s worst flooding in six decades. The Australian Bureau of Meteorology reported that areas around Sydney and in the Hunter and Mid North Coast regions were drenched with 400 to 600 millimeters (16 to 24 inches) of rain across four days, with the most extreme totals approaching one meter.

Water levels rose to major flood levels along the Clarence, Gwydir, Mehi, Lower Hunter, Manning, and Colo rivers, among others. The Hawkesbury-Nepean River system around Sydney saw its highest crests since 1961. At least 40,000 people were evacuated and several died across New South Wales (NSW) state, while farmers suffered significant crop and livestock losses.

On March 23, 2021, the Operational Land Imager (OLI) on Landsat 8 acquired a natural-color image (above) of flooding in the Hawkesbury-Nepean River system along the western edge of Sydney. For comparison, the same area is shown on April 5, 2020.

Upstream from Sydney, the Warragamba Dam has been overflowing since March 20 and is expected to continue doing so for a week. The BBC reported: “Warragamba Dam discharged 500 gigalitres on Sydney—equivalent to the volume of Sydney Harbour.” The downstream Hawkesbury-Nepean valley has several choke points that cause river water to pile up and rise onto floodplains west of Sydney in what emergency management authorities refer to as a bathtub effect. 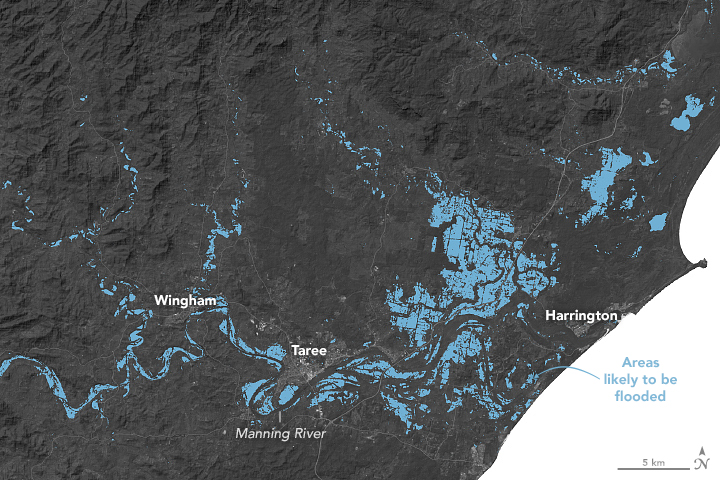 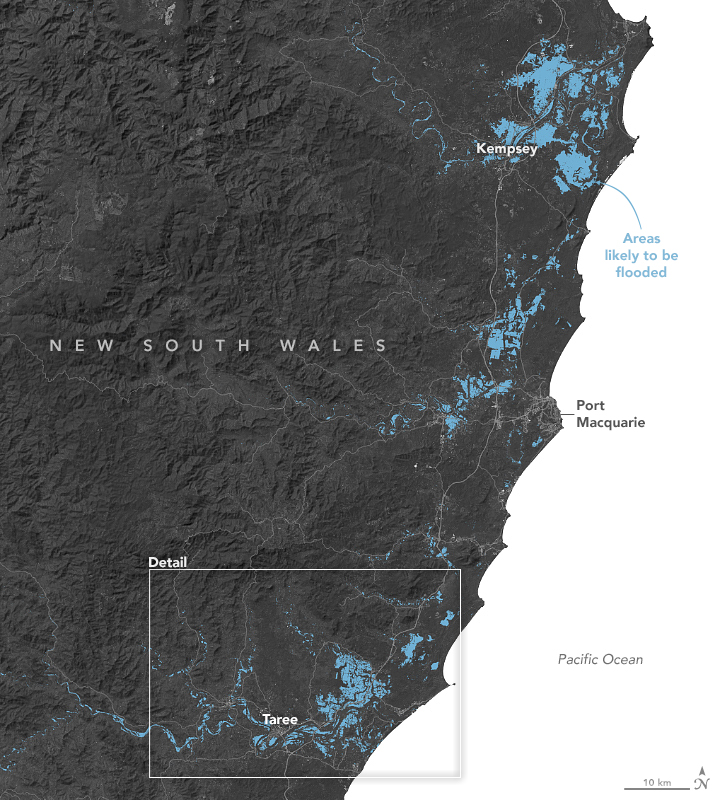 The flood proxy maps above highlight areas of the Mid North Coast region that were likely to be flooded (indicated in blue) on March 20, 2021. The maps were derived from synthetic aperture radar (SAR) data acquired by the Copernicus Sentinel-1 satellites, operated by the European Space Agency (ESA). The maps were created by the National Central University of Taiwan in collaboration with the Advanced Rapid Imaging and Analysis (ARIA) team at the Jet Propulsion Laboratory and Caltech. The ARIA team is supported by NASA’s Earth Science Disasters Program.

Radar signals can penetrate cloud cover, allowing researchers to observe landscapes that are obscured from other satellite sensors. The team created the maps by comparing radar observations collected before and after the rainfall. Specifically, the researchers look for changes in brightness: if a normally rough ground surface is replaced with a smooth water surface, the brightness of those pixels will change.

Many of the areas affected by floods in March 2021 were afflicted with extreme drought and wildfire in the summer of 2020. Burn-scarred landscapes often produce more runoff during extreme rain events because the heat from fires reduces the capacity of the soil to absorb and hold on to water. Furthermore, fire strips away plants and trees that could intercept raindrops before they reach the ground.

The animation above shows rainfall rates and accumulation across eastern Australia from March 16-23, 2021. Those data are overlaid on shades of white and gray from NOAA infrared satellite observations of cloudiness. The rainfall data are remotely-sensed estimates that come from the Integrated Multi-Satellite Retrievals for GPM (IMERG), a product of the Global Precipitation Measurement (GPM) mission. Rainfall rates are marked in blue, while accumulation is represented in green. Due to averaging of the satellite data, local rainfall amounts may be significantly higher when measured from the ground.

La Niña patterns in the tropical Pacific have brought more rain than usual to eastern and southeastern Australia this summer. That extra rain likely left the soils and waterways with less capacity for absorbing new rainfall in March.