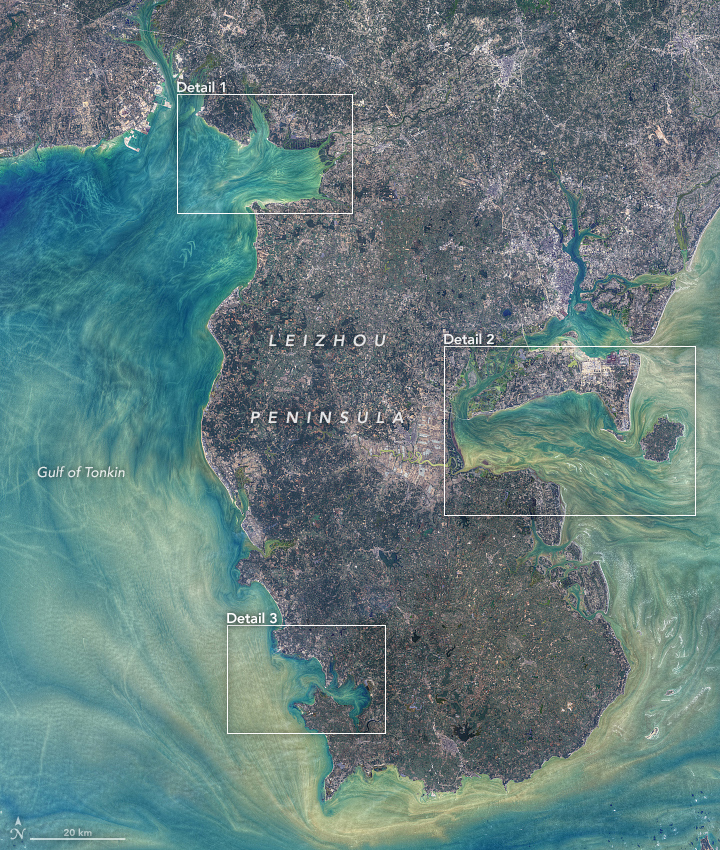 Tides, currents, and human activity combine to produce art-like patterns in the waters around China’s Leizhou Peninsula. The patterns are visible in these images, acquired by the Operational Land Imager (OLI) on Landsat 8 on January 1, 2021. Norman Kuring of NASA’s Ocean Biology group applied color-filtering techniques to draw out the fine details in the water, but the features are real.

The image above shows the waters around the entire Leizhou Peninsula, a landform that juts out into the South China Sea from the southernmost portion of mainland China. The Gulf of Tonkin (Beibu Gulf) lies to the west, and the Qiongzhou Strait (Hainan Strait) passes to the south.

Numerous bays, harbors, and estuaries line more than 1500 kilometers of coastline along the peninsula. Two on the peninsula’s western side—Anpu Harbor and Liusha Bay—are visible in the detailed images below. 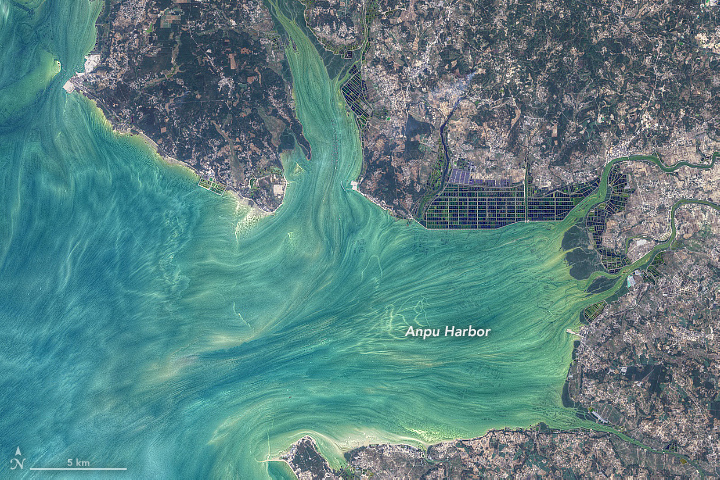 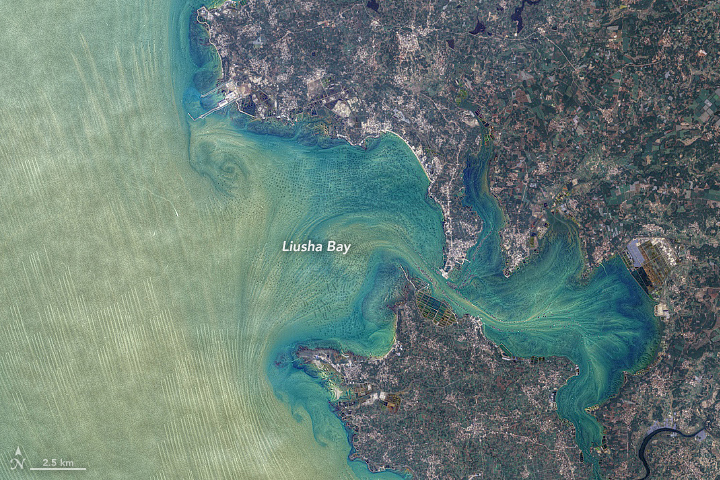 In both waterbodies, the geometric patterns of aquaculture stand out. Liusha Bay has historically been known for oyster farms that produce high-end “Nanzhu” pearls. In recent decades, excess sediment runoff, competition for space, and a series of natural disasters have threatened the industry, but news reports indicate that production of these pearls is recovering. The harvest of other types of shellfish and finfish is also common here.

According to Xiaochuan (Sean) Ma, a scientist at the Institute of Oceanology, Chinese Academy of Sciences, the color of the water might be the result of suspended sediment and a high concentration of phytoplankton—a result of the region’s ecological conditions and eutrophication of its waters. Ma noted that phytoplankton can be abundant around the equipment deployed by fishermen.

One fishing method traditional in some parts of China involves pairs of poles anchored in the seabed, with a net spanning the tens of meters between them. Ma speculated that the parallel lines off Liusha Bay could be from the water current passing by the poles of this type of fishing arrangement. 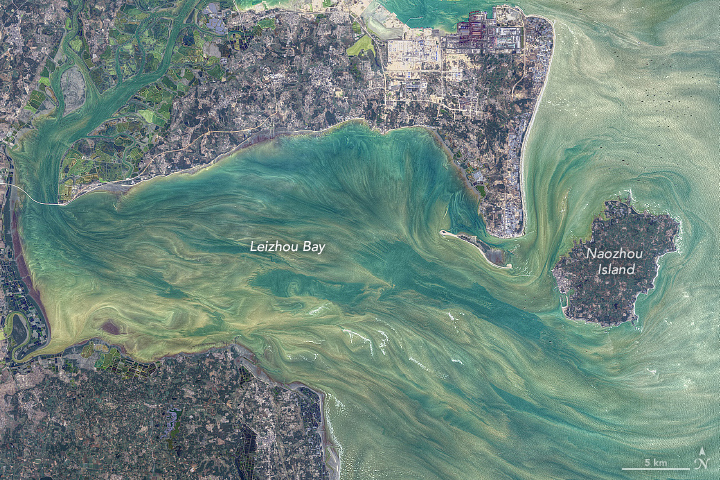 In contrast to the geometric patterns made by people, the paintbrush-like appearance of the water is a work of nature. Currents and tides move and mix the colorful water. “It is impressive how much power the longshore transport is showing,” said Peter Clift, a scientist at Louisiana State University.

Waters east of the peninsula also display complex patterns. In Leizhou Bay (above), sediment-laden river water contributes to the colorful swirls. Sediment from the Pearl River Delta, about 400 kilometers (250 miles) to the northeast, might also contribute. 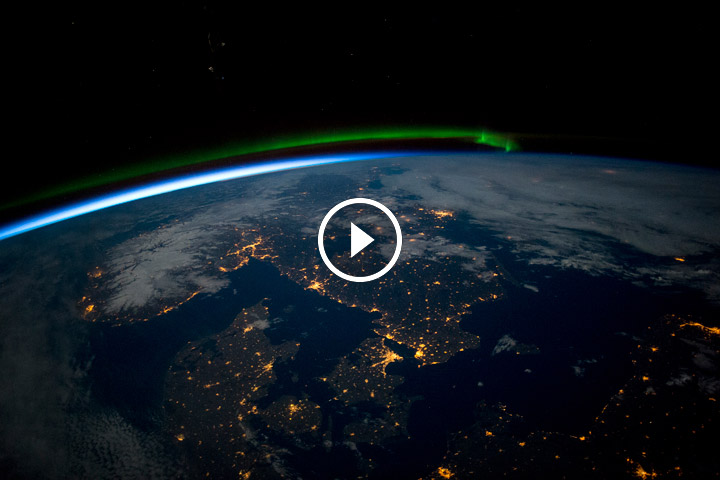 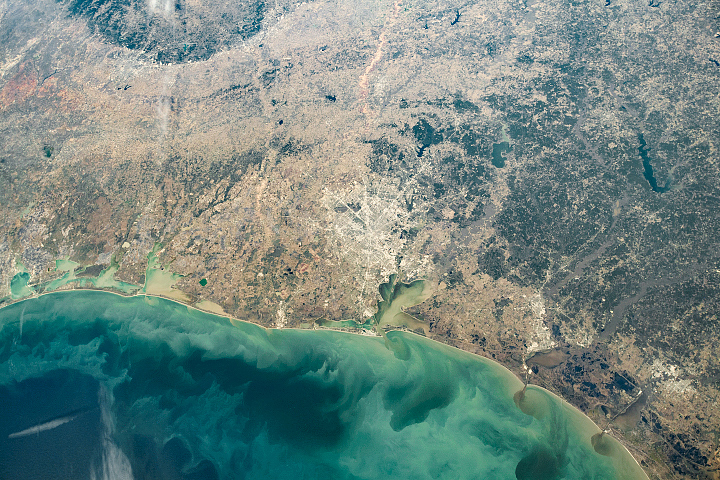 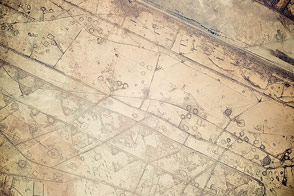 Fortification Patterns on the Iraq-Iran Border

Fortifications and earthworks from an old war look very similar to oil pads from drilling operations. 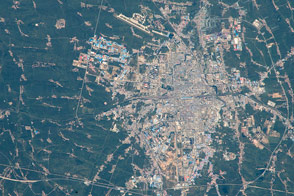 Some parts of the world are marked by such unique human patterns that astronauts learn which country they are overflying just by looking out the windows on the International Space Station.