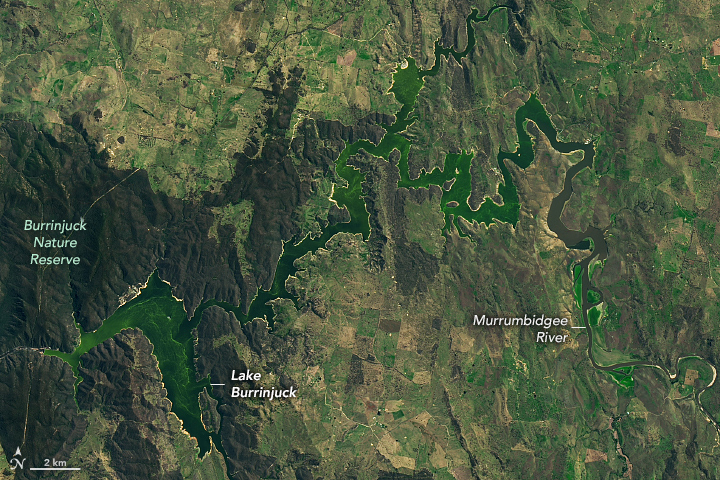 Since late January 2021, blue-green algae have spread across Lake Burrinjuck in New South Wales, Australia. Authorities issued warnings to stay out of the lake, which usually attracts many people for waterskiing and fishing around this time of the year.

On February 10, 2021, the Operational Land Imager (OLI) on Landsat 8 captured imagery of algae blooms in Lake Burrinjuck and the Murrumbidgee River.

Blue-green algae, also known as cyanobacteria, typically appear as greenish clumps or scum on the surface of the water and have a strong musty odor. They occur naturally in modest numbers but can reproduce quickly under favorable circumstances—namely sufficient sunlight, stagnant water, and high amounts of dissolved nutrients, such as fertilizer runoff. 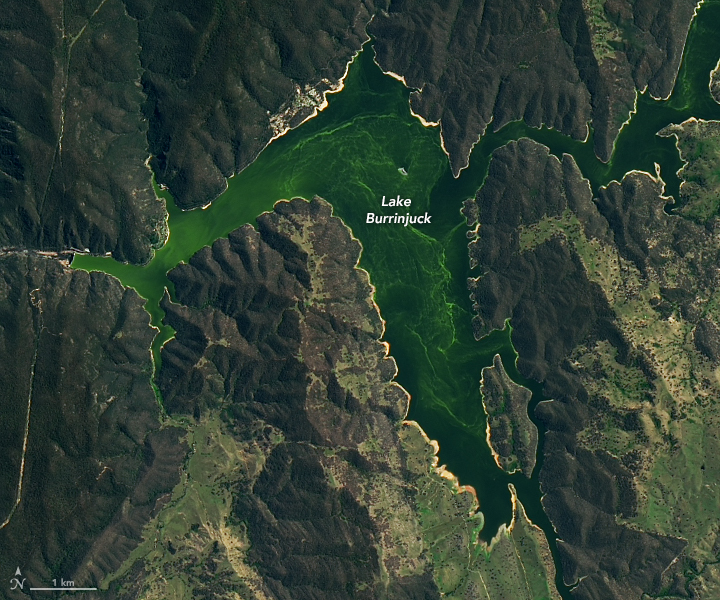 Blue-green algae blooms can be fatal for pets and can cause stomach problems, rashes, and even vomiting for humans, if ingested. They could also harm the fish population at the lake, which is known for its golden perch, Murray cod, rainbow trout, and more. When the algae die, they sink to the bottom of the lake, where they are decomposed by bacteria. If the concentrations of algae and bacteria are high enough, the process can deplete oxygen concentrations in the water, causing fish to suffocate.

Based on algal samples, the state-owned water supplier and river operator WaterNSW issued alerts in late January and February to stay out of the water and to stop recreational activities in the lake. As of March 2, it reported lower concentrations of algae but still advised people not to drink untreated lake water and to exercise caution if partaking in water activities.

Longtime local residents told The Canberra Times that the algal outbreaks were the worst they have seen in more than a decade. According to WaterNSW, the blooms were somewhat unusual since the lake is located in a cooler part of the state and the Burrinjuck Dam recently received a large inflow of water. A spokesperson for WaterNSW said, however, the inflows may have brought in nutrients from other catchments. 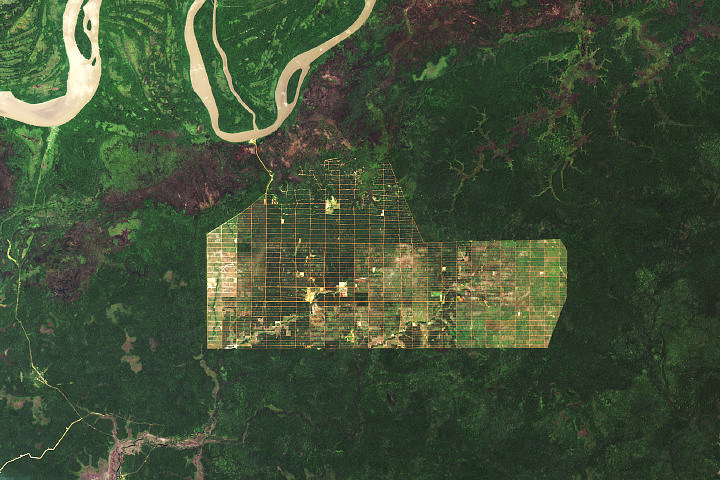 Sitting near Australia’s rugged southern coast, the South Australian town of Mount Gambier is built on the side of an extinct volcano. The caldera of the volcano has filled with rainwater, forming a very deep lake that provides the town with water. The large caldera lake is called Blue Lake due to a rather peculiar characteristic: the water turns a brilliant cobalt blue during the summer and early fall.