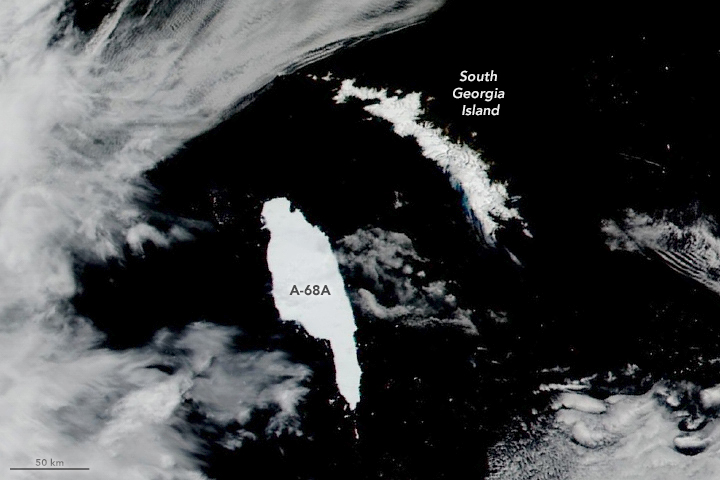 Antarctic iceberg A-68A has drifted menacingly close to South Georgia, a remote island in the southern Atlantic Ocean. Scientists around the world are watching to see what the berg will do next.

The concern is that the iceberg has approached the edge of the island’s submarine shelf—an area where waters become relatively shallow, measuring less than 200 meters deep. Scientists think the iceberg extends about that far below the water line, meaning it has the potential to snag the seafloor and become “grounded.” Biologists worry about the potential effect a grounded iceberg could have on the island’s wildlife, such as the ability for penguins to access food.

When we last showed A-68A on November 5, 2020, the enormous block of ice floated about 500 kilometers offshore. Five weeks later, the berg was poised less than 100 kilometers offshore as the Visible Infrared Imaging Radiometer Suite (VIIRS) on the Suomi NPP satellite acquired this natural-color image (above) on December 14. 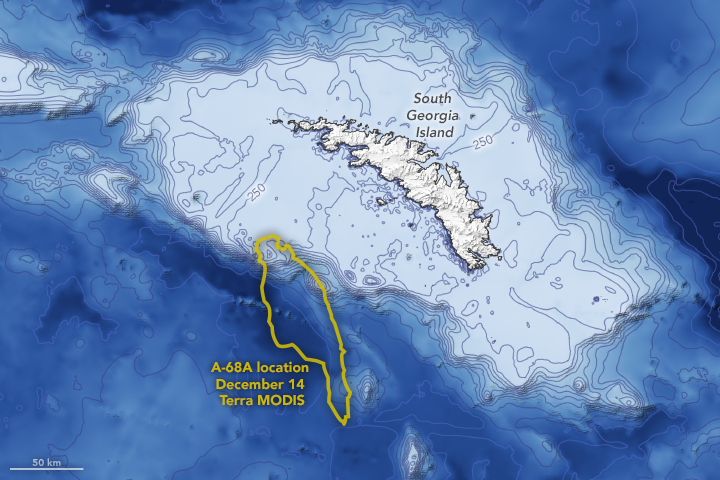 In recent days, a clockwise rotation has appeared to move one end of the berg over the shelf and into shallow waters. Klaus Strübing, a scientist with the International Ice Charting Group (IICWG), thinks the iceberg might already be grounded. He reported that as of December 13, part of the iceberg was in waters just 76 meters deep. Time will tell if A-68A will stall on the shelf, or if the region’s complex ocean currents will carry the berg back out to sea and around the island.

Strübing has been using radar images from the European Space Agency’s Sentinel-1 satellites to track A-68A since it first broke from Antarctica’s Larsen C Ice Shelf in July 2017. In a paper presented at the 2020 virtual meeting of the IICWG, he pointed out some of the peculiarities in A-68A’s journey. For example, the berg’s rotation changed from counter-clockwise to clockwise and then back again. Occasionally the berg made quick progress, and at times it came to a halt. Sometimes it drifted straight, and other times it drifted in circles.

History has shown that icebergs travel complex paths on their drift northward from the Southern Ocean into the warmer waters of the South Atlantic. David Long, a polar ice scientist at Brigham Young University, noted similarities between A-68A’s journey and iceberg A-43B. In 2004, that iceberg stalled for several months in a similar location as A-68A before ultimately drifting around the island.

Strübing thinks that studying the drift of A-68A in detail could help scientists learn more about ocean dynamics in the region, while improving models of the paths of icebergs large and small. That’s important because massive icebergs—and the smaller pieces that break from them—are especially hazardous when they drift into the Southern Ocean’s main shipping routes. 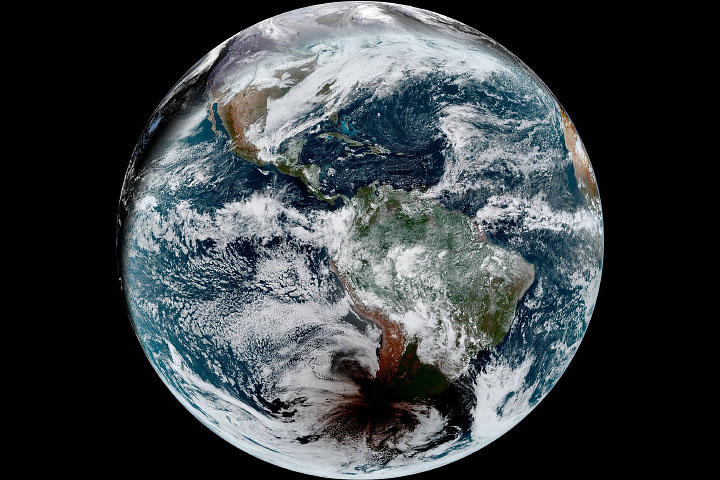