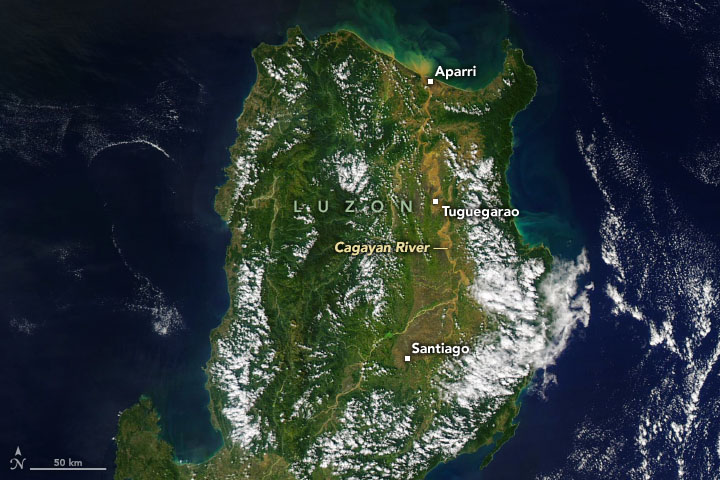 In the days after Typhoon Vamco (Ulysses) passed through, the Philippines provinces of Cagayan and Isabela saw devastating flooding and landslides. Officials in Tuguegarao City, the provincial capital of Cagayan, called the flooding the worst they had endured in at least four decades.

According to UN Office for the Coordination of Humanitarian Affairs, more than 3.6 million people have been affected by the floods, with nearly 280,000 displaced and at least 73 deaths. Though flood waters are now receding, more than 67,000 homes have been damaged or destroyed, and power and communications are still cut off in many areas.

In the early afternoon on November 18, 2020, the Moderate Resolution Imaging Spectroradiometer (MODIS) on NASA’s Aqua satellite acquired this natural-color image of the northern portion of Luzon Island. The swollen and muddy Cagayan River stands out against the inland landscape and pours sediment into the Philippine Sea near Aparri. Because of its tropical climate, it is often difficult to get visible imagery of the island.

Three typhoons have hit the Philippines in the past four weeks, and while none of them made direct landfall in northern Luzon, each dropped abundant rainfall in the region. Typhoon Molave (Quinta) first passed through in late October, and Super Typhoon Goni (Rolly) blasted southern Luzon on November 1. By the time Typhoon Vamco arrived, the Cagayan River and its tributaries were already swollen. The cumulative effect of the storms plus the monsoon season overwhelmed the region’s waterways.

Flowing mostly north for 500 kilometers (300 miles), the Cagayan has wide channels and flood plains, with sizable sections deforested and covered by farmland. The main stem receives water from many streams and smaller rivers. Just a year ago, the flood-prone river valley was devastated by what was then called a “100-year flood.” When the trio of storms soaked the area in late 2020, regional water managers opened the floodgates on Magat Dam, one of the largest in the country, to keep water from over-topping the dam. That added volume to the swollen waterways downstream.

According to news reports, flood waters reportedly rose as much as 5 meters in some areas along the valley. The European Space Agency’s Sentinel-2 satellite got a closeup, natural-color view of flooding around Tuguegarao City, while Sentinel-1 acquired a radar view of the flooded valley.

In the wake of three typhoons within a month, the Philippines provinces of Cagayan and Isabela have seen some of their worst flooding in decades.