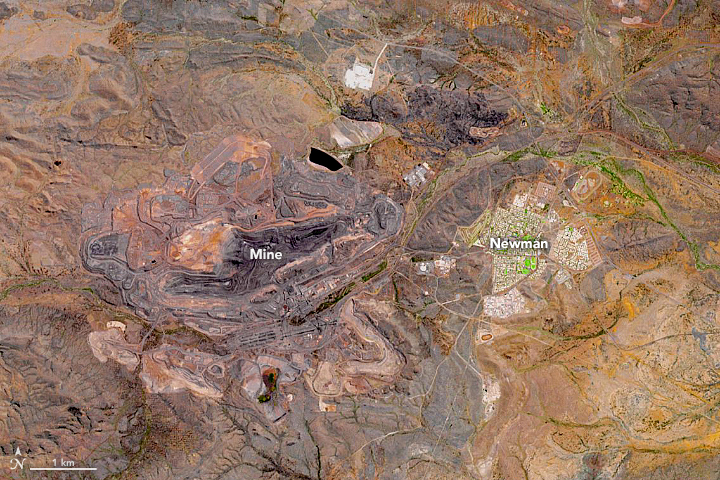 Australia is a top iron ore producer and exporter in the world, holding nearly 30 percent of the estimated global supply. The majority of those reserves are found in Western Australia, home to one of the country’s largest and oldest iron ore mines.

The image above shows the Mount Whaleback Iron Ore Mine, adjacent to the mining town of Newman. The image was acquired by the Advanced Spaceborne Thermal Emission and Reflection Radiometer (ASTER) on NASA’s Terra satellite on July 16, 2020. The image was composed from green, red, and near-infrared light, a combination that helps differentiate components of the landscape; water is black and vegetation is green.

The deposits at Mount Whaleback were discovered in 1957 by prospector Stan Hilditch. After World War II, Hilditch began exploring Western Australia for minerals. He concentrated their search in the hills because he believed the mountainous terrain would help the minerals precipitate. Searching in the Ophthalmia Range, he climbed up a hill and stumbled upon a massive iron ore deposit that soon became Mount Whaleback iron ore mine. 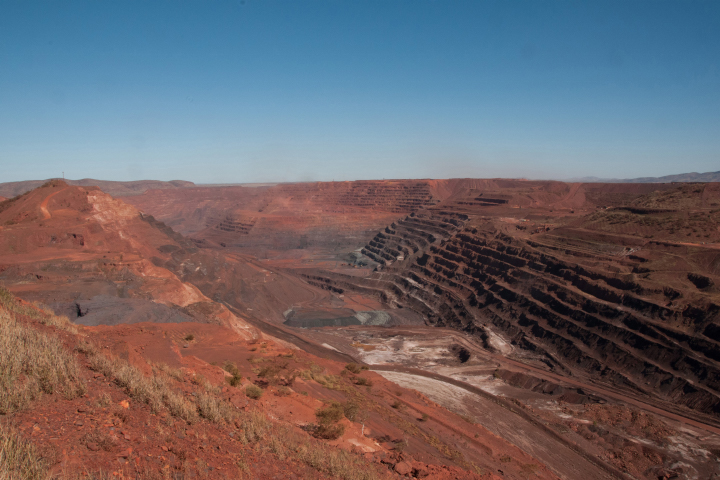 Hilditch tried to open Mount Whaleback for business in 1961, after Australia lifted an embargo on exporting mineral goods. But in spite of the abundance of ore, he had trouble convincing companies to invest in his mine because the deposits were located far from the coast (for shipping) and with a very small population to work on extracting them. Eventually, Hildritch and his business partner sold their temporary reserves to an interested company for $10 million. The Mount Newman Mining Company later built the adjacent mining town, which is now home to about 8,000 people.

A lot of the iron ore found at Mount Whaleback is hematite, which has been the dominant iron ore mined in Australia since the 1960s. Pure hematite contains around 70 percent iron and ranges in color from silver to reddish brown. Iron is extracted from the minerals and commonly used for making steel.

The ore at Whaleback mostly occurs in banded iron formations, appearing as colorful alternating layers of mineral deposits on the landscape. The formations were first started more than 2.5 billion years ago when the landmass was under water. Ancient forms of bacteria photosynthesized and released large amounts of oxygen; that oxygen reacted with seawater to form insoluble iron oxide. The iron would precipitate out of the salt water as minerals such as hematite, which then accumulated as sediment on the sea floor.