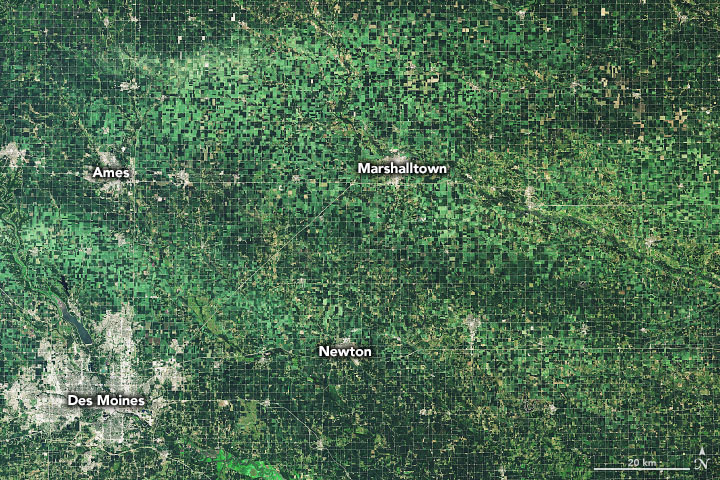 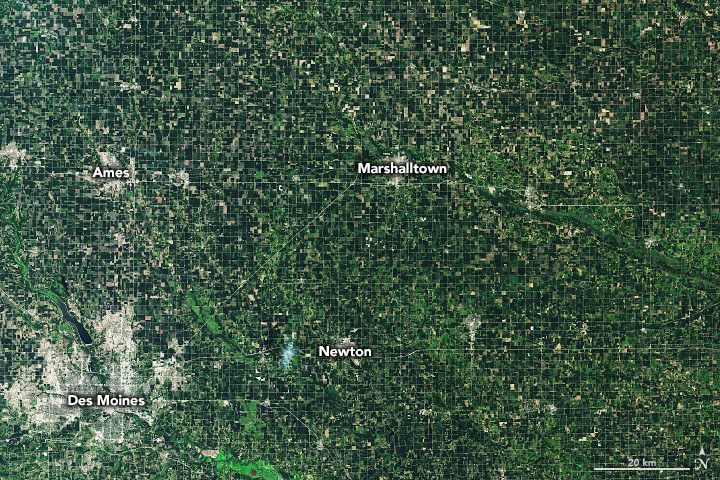 Despite facing a dry July, many farmers in Iowa were expecting a good harvest in the fall. Instead, many had their fields of corn and soybeans flattened by hurricane-force winds.

On August 10, 2020, an unusually strong and long-lasting line of thunderstorms—a derecho—battered vast swaths of Iowa and the U.S. Midwest. More than a week after the storm, tens of thousands of Iowans were still without electric power, and many farmers were mulling whether they could salvage crops and repair grain silos before the coming harvest.

The Operational Land Imager (OLI) on Landsat 8 captured an image of storm-damaged fields around Marshalltown, Iowa, on the day after the storm. For comparison, the second image shows the same area on July 10, 2020. Wind-damaged crops appear light green. Darker areas within the damage swath may be tree breaks or fields where crops took less damage.

While large hail can quickly strip stalks and pulverize corn and soybean plants—leaving dark brown stripes across rural landscapes—much of the damage in August 2020 was caused by fierce winds that toppled stalks that were already heavy with maturing corn husks, explained Christopher Schultz, a NASA Marshall Space Flight Center meteorologist. However, the damage was not exclusively caused by wind. In some areas, small hail battered plants and sliced away leaves.

It is possible that some of the toppled plants still have intact roots and will continue to grow in the coming weeks; others could be used for silage or other purposes. But many experts anticipate severe losses and big challenges for harvesting and storing anything that remains. While damage estimates are evolving, agricultural economists project that the storm likely caused nearly $4 billion in damages, which would make it one of the costliest thunderstorm events on NOAA’s weather and climate disaster tracker for the past decade.

“This is by no means the first time the Midwest has seen severe thunderstorms cause crop damage, but the vast extent of the damage here really stands out,” said Jordan Bell, another NASA Marshall researcher tracking the event. “We’re talking about a damage swath that is an order of magnitude larger than other tornadoes or thunderstorms we have seen in the past. This is an event people are going to remember for a long time.” A broader view of the damage from the Moderate Resolution Imaging Spectroradiometer (MODIS) sensor is available here.

Schultz and Bell are part of a NASA Earth Applied Sciences project that aims to develop climatologies of hail events in North America and around the world. Such data could help insurance companies and other stakeholders assess the risk of crop losses due to severe thunderstorms.

“We are using a whole suite of sensors to detect storms and assess the damages they cause,” said Kristopher Bedka, the leader of that project. “And we are doing it not just for this event, but for catastrophic events all around the world so we can learn how to best quantify damage in an automated way.”