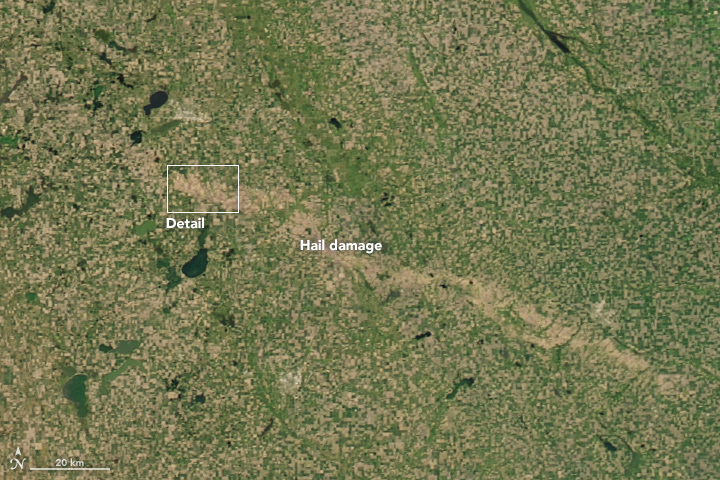 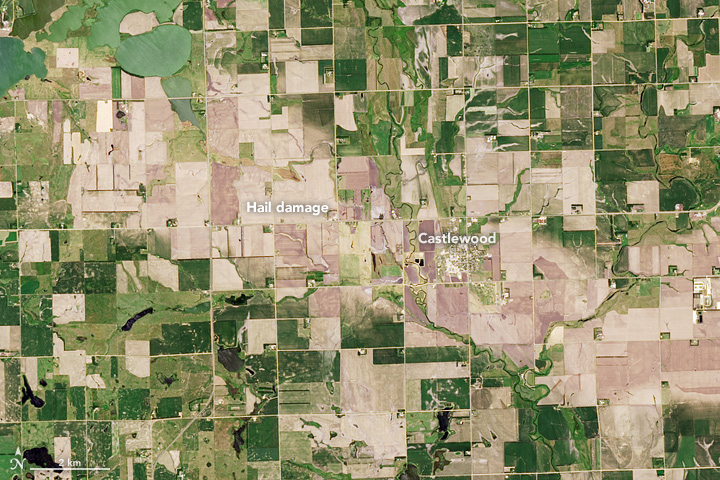 The growing season for corn and soybeans—two of the most widely grown crops in the central United States—runs from May through August. That is the same season that brings the area its most severe thunderstorms, which can pummel crops with damaging winds and large hail. The combination can prove expensive: hail causes several hundred million dollars of crop damage every year.

In some cases, the damage is small and relatively localized. In others, hail draws long, wide swaths of crop damage across the landscape. People living in South Dakota and Minnesota got a reminder of this on June 22, 2017, when an early-morning storm system dropped a trail of destructive hail. As seen in this natural-color image, damaged vegetation stretched farther than 60 miles (100 kilometers) from Thomas, South Dakota, to Marshall, Minnesota. The image was captured on July 2, 2017, by the Moderate Resolution Imaging Spectroradiometer (MODIS) on NASA’s Aqua satellite.

One of the hardest hit areas was Castlewood, South Dakota, which experienced wind gusts as high as 90 miles (140 kilometers) per hour and hail the size of golf balls. In town, hail broke windows and punched holes in the siding of homes. In the farmland outside of town, crops were severely damaged. The second image shows a more detailed view of the damage around Castlewood. Note that some of the lighter brown fields may simply be fallow. The Operational Land Imager (OLI) on Landsat 8 captured the image on July 7, 2017.

“Hail damage is spotted frequently with satellites when there are major events that occur over a long distance. It is particularly evident in the Midwest during times when crops—corn especially—are tall and uniformly green across a large area,” said Andrew Molthan of NASA’s Short-term Prediction Research and Transition Center (SPoRT) team. “It is notable that this damage swath is visible from such a broad suite of satellites and even appears quite well on relatively coarse imagers like GOES-16, MODIS, and VIIRS.”

Members of the SPoRT team have published research that details how meteorologists and others can tap into satellite data to assess crop damage after hail events. In addition, the SPoRT team is currently working with the National Weather Service to feed relevant satellite imagery into a toolkit for damage assessment teams (part of a NASA Applied Sciences project). Reaching some locations can be time-consuming and difficult for ground-based damage assessment teams, so making use of satellite imagery should make the process quicker and cheaper.

NASA Earth Observatory images by Jesse Allen, with MODIS data from the Level 1 and Atmospheres Active Distribution System (LAADS) and Landsat data from the U.S. Geological Survey. Story by Adam Voiland. Special thanks to Scott Bachmeier (University of Wisconsin-Madison) for first spotting the hail scar.