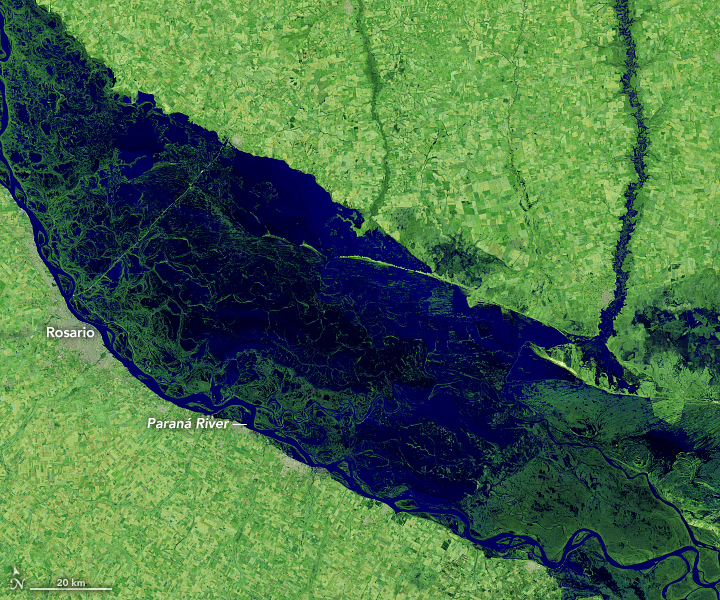 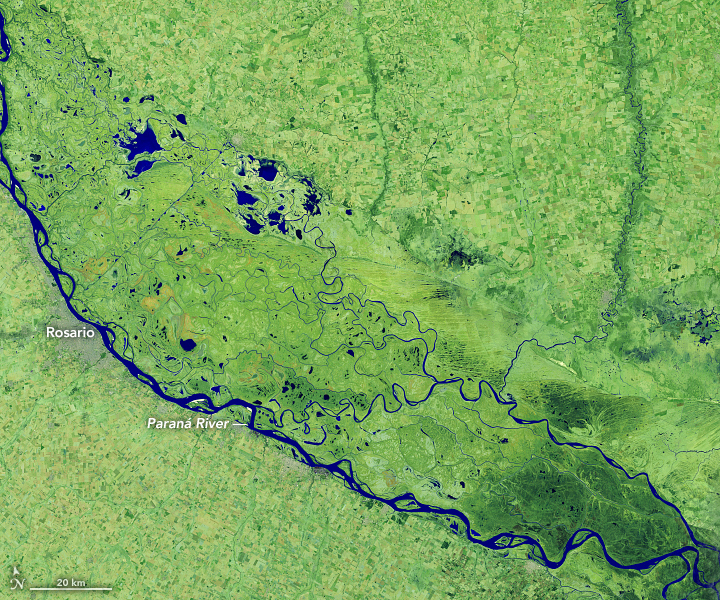 A prolonged period of unusually warm weather and drought in southern Brazil, Paraguay, and northern Argentina has dropped the Paraná River to its lowest water levels in decades. The parched river basin has hampered shipping and contributed to an increase in fire activity in the delta and floodplain.

On July 3, 2020, the Operational Land Imager (OLI) on Landsat 8 captured this false-color image (bands 7-6-4) of the river near Rosario, a key port city in Argentina. The combination of shortwave infrared and visible light makes it easier to distinguish between land and water. Water appears dark blue or black. The second image shows the same area on July 1, 2019, a day when water levels were high across many of the delta’s marshes, lagoons, islands, and meandering streams.

Data from the Argentine coast guard shows that, on July 3, 2020, river gauges near Rosario stood at 1 meter (39 inches)—higher than in May 2020, when it dipped as low as 0.08 meters (3 inches). “While this low water level was the worst in the past 49 years, much lower levels were frequent before the 1970s,” explained Andrés Antico, a climatologist with Argentina’s National Scientific and Technical Research Council who is working on a project to recover and preserve historical records for the Paraná River. Thanks to dams constructed in the 1970s in the upper Paraná in southern Brazil, water managers can usually prevent low water levels by releasing water from reservoirs during dry periods. 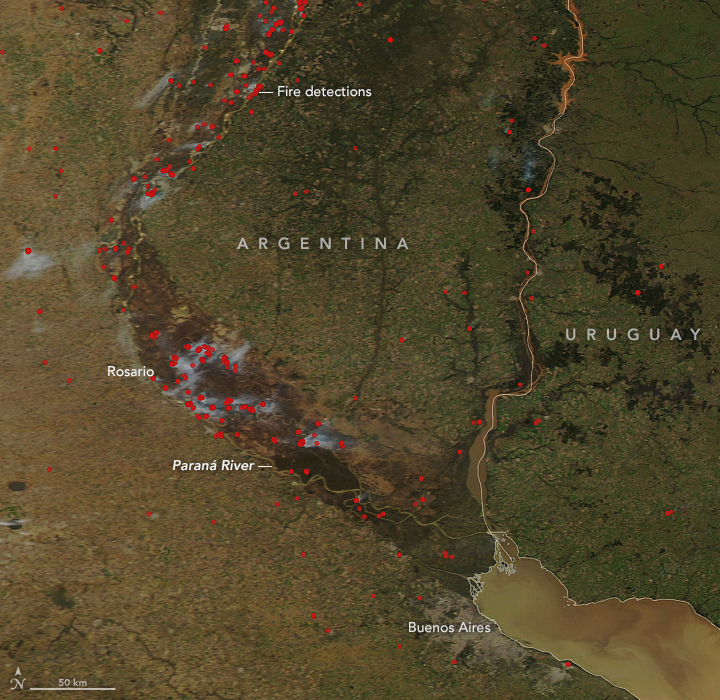 The drought has affected the region since early 2020, and low water levels have grounded several ships, and many vessels have had to reduce their cargo in order to navigate the river. With Rosario serving as the distribution hub for much of Argentina’s soy and other farm exports, low water levels have caused hundreds of millions of dollars in losses for the grain sector, according to news reports.

The low water levels on the Paraná River have coincided with increased fire activity within the delta. Remote sensing scientists at the Universidad Nacional de San Martín have been tracking how many active fire detections the Visible Infrared Imaging Radiometer Suite (VIIRS) and Moderate Resolution Imaging Spectroradiometer (MODIS) satellite sensors have made in recent months, finding that MODIS had in 2020 detected more than 1,450 hotspots in the Paraná River delta through July 22, more than any other year since 2008. The natural-color image above, acquired by MODIS, shows where the VIIRS sensor detected unusually warm temperatures associated with fires on July 14, 2020.

Low water levels mean there is more area—mostly grassland and shrubs—available to burn this year. According to Patricia Kandus of the Universidad Nacional de San Martín, many fires appeared to have been set intentionally, though dry conditions have also made it easier for fires to escape and burn uncontrolled. “Fires have been historically used in this region to provide pasture,” she said. “They are also widely used in the islands to hunt wild animals, as well as to clear vegetation cover to carry out land reclamation and diking constructions for agriculture and tree planting projects.”

While the Paraná River Basin received some rain in June and July, river watchers do not expect the river to make a full recovery until sustained wet season rains arrive in October.